Steve Lantner: Given - Live In Munster 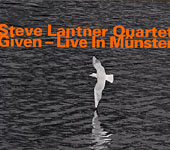 What is called free jazz can cover a very wide spectrum of creative music, not all of which is as unfettered as the name implies. At the most basic level, choice of instrumentation is a clear limitation, while pre-agreed moods or written heads may further reduce the possibilities.

On Given, the second release by Boston-based pianist Steve Lantner's quartet, the two predetermined elements were that the players use the intervallic structure 0146 (a four-note series such as C, D-flat, E, F-sharp) and that they play a single continuous piece. So how does that translate into a listening experience? Whether down to the structural concept or the shared experience and evident skill of the participants (bassist Joe Morris, saxophonist Allan Chase and drummer Luther Gray, the result is an absorbing, free-flowing set which seems to cohere naturally without resorting to obvious organizational signposts.

Although Lantner pursues oblique contrapuntal ends behind Chase's horn early on, he enjoys a lyrical duet with the saxophonist on "Part 4" and really shines with his dense unpredictable fronting of a piano trio in "Part 5." In a determinedly propulsive rhythm section, Morris selflessly feeds options to his partners, but steps out for a lovely passage at the conclusion of "Part 3" where he contrasts high register African kora-like patterns with tumbling bass notes. Chase, an esteemed educator at the New England Conservatory, brings to mind the late saxophonist Jimmy Lyons in his ability to sculpt measured but insistent lines, spinning out logically extended phrases without defaulting to the extremes of his horn. That sense of controlled passion holds for each member of this quartet and raises this disc above the free jazz norm.