Tyrone Davis: Give It Up (Turn It Loose): The Very Best of the Columbia Years

By WOODROW WILKINS
October 9, 2005
Sign in to view read count 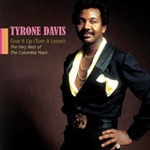 Typically, when Greenville, Mississippi and music are mentioned in the same breath, Delta blues singers come to mind—like Lil' Dave Thompson, Willie Foster, Roosevelt "Booba Barnes, and Eden Brent. But this small city along the river has produced singers in other genres as well. Bud Cockrell was one of the founding members of the rock group Pablo Cruise; likewise Bruce Blackmon with Starbuck. On the soul side of things, Mary Wilson was one of the original Supremes and the only member to remain with the group through its existence in the 1960s and mid-'70s.

Yet another voice also made it big along the soul and R&B circuits: Tyrone Davis. Local historians say he was actually born in a rural community about twenty miles from Greenville, but like many artists, he named the nearest city as his home. Davis left our world earlier this year, passing away in February due to complications from a stroke he suffered last year. However, his music lives on.

Give It Up (Turn It Loose) is a fifteen-song compilation of Davis' career with the Columbia label (1976-1981). Although two of his biggest hits—"Turn Back the Hands of Time and "Can I Change My Mind —are not part of this collection, you still can't lose with these offerings. This silky smooth soul singer cranked out nine R&B chart entries that are part of this legacy, including "This I Swear and "In the Mood, both of which made the Top 10.

It's easy to see why "In the Mood was such a success. Davis is at the top of his game on this soul-blues ballad, backed by a horn section worthy of Earth, Wind & Fire or the Commodores. Then there is the upbeat title song; with a funky bass line setting the pace, Davis admonishes unhappy women to let go of the men who won't give good loving.

Give It Up (Turn It Loose) is one of five new releases in the Columbia/Legacy Rhythm & Soul Series. Others feature some of the best music by The Main Ingredient, Deniece Williams, Teena Marie, and Al Green. Apart from their timeless quality (this music never really gets old), these are love songs at their soulful best—romantic music created before it became fashionable (or required?) for profanity and graphic descriptions of sex to dominate song lyrics.

Aside from being the classic charmer, Davis never had to be bleeped in order for his songs to get airplay on commercial radio. The songs are adult in tone, of course, particularly when he sings about being "satisfied. But the lyrics are clean. Add to that a plethora of session musicians, including a full string session, and you have a five-star album that represents what soul singing is all about.

Title: Give It Up (Turn It Loose): The Very Best of the Columbia Years | Year Released: 2005 | Record Label: Sony Music