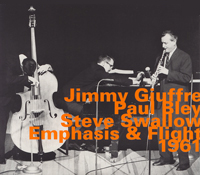 At a time when the leading edge of mainstream jazz was pulling through modal jazz into hard bop, Jimmy Giuffre was headed in another direction. His early trios were simultaneously polite and experimental, an unusual combination that revealed both his cool roots and his fearlessness in stepping over the cliff. Nowhere were these qualities more evident than on his early-'60s trio records alongside pianist Paul Bley and bassist Steve Swallow.

Titles like Free Fall and Flight explicity emphasized his steps away from safety, while Thesis and Fusion spotlighted the more intellectual aspects of his work. In the presence of collaborators who understood how to take compositions far beyond their formal structure, he threw away "arrangement," ablated conventional ideas of "accompaniment," and redefined "solos." And since this particular trio (as well as others around the same time) lacked a drummer, time became a piece of putty to be stretched and squeezed at will. With some effort you can imagine how a drummer might have sounded, but almost none—if any—of Giuffre's contemporaries could have pulled it off.

All that is visible on these two live records from November of 1961 which originally appeared on Hat Hut almost a decade ago and have now been reissued in a double set. They offer an expanded opportunity to hear the Giuffre/Bley/Swallow trio to run wild (very politely, of course) in a concert setting. And since they were recorded only two weeks apart, they combine to form an extended snapshot of a creative nucleus in action.

Paul Bley has always been oriented toward "classical" playing, both in his construction (particularly phrasing) and in his touch, which is generally precise and direct. Echoes of '50s experimentation by the new wave of classical composers appear in his "preparation" of his instrument to yield buzzing timbres, which he combines with subtle blues accents on "Emphasis," for example.

Giuffre's playing (only on clarinet) mostly hovers in the mid to high range of the instrument, using higher frequencies to add emphasis and float through bird-like flutters. Many times throughout these two hours of performance his playing recalls efforts decades later by Michael Moore—light and flowing, always lyrical, adopting drama through breath. And perhaps most significantly, both players prefer phrasing that elasticizes time.

The conversations between the clarinet and piano constitute the majority of the interest and drama in the music, since Bley and Giuffre feel no hesitation dancing around each other's lines. Bley balances out the smoothness of the clarinetist's playing by emphasizing more staccato figures, irregularly spaced and often harmonically obtuse. Unfortunately Steve Swallow, here on the acoustic bass rather than his electric axe of late, is relatively low in the mix, so you have to listen to appreciate the way he introduces depth and heaps of tiny intervals to thicken up the music.

Composition as such is a poorly defined concept with Giuffre's groups, but these relatively short pieces (averaging about five minutes) each have their own twist and character. No jump cuts or dramatic postmodern switches here. Carla Bley's "Jesus Maria" has a mournful aura, nearly dirge-like in its darkness. Paul Bley's "Carla" is by far the noisiest, most dissonant, and irregular piece on the record. Steve Swallow gets a chance to come to the foreground on "That's True, That's True," and Giuffre fully arranges most of the very brief "Suite for Germany."

This particular trio was fairly well documented on five records from 1961-62. These two live discs complement the studio versions in their raw spontaneity and warmth, and they are a fine place to start. But in the end you'd be hard-pressed to pick a favorite, which is a tribute to the high standards these three players maintained.

Visit Hatology on the web.