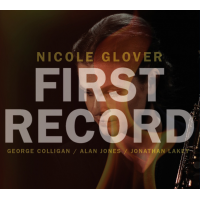 Saxophonist Nicole Glover is seeking the same musical truths as newly-minted NEA Jazz Masters Archie Shepp and Pharoah Sanders have been since JC left the building in 1967. She is doing so with a sonic freshness and artistic restraint not common in those trailblazers playing before her. She is opting for a post-bop-tempered free jazz that still relies on a harmonic underpinning rather than the cacophonous noise emitted from the most agonal "new thing." Like the early Atlantic sides of Ornette Coleman, Glover reveals much of the music this way.

After a recording of white-hot improvisation characterized by the orchestral comping my pianist George Colligan playing the part of McCoy Tyner to Glover's JC, the saxophonist turns in a beautifully full-throated "Tennessee Waltz." The briefest of piece on the recording, Glover takes "Waltz" straight ahead. While her duet partner Colligan is the one wandering off the schoolyard toward harmonies unseen or realized. His solo is quietly percussive, with deep shades of block chords interspersed with blue notes. Glover summons a most sumptuous sound from her tenor saxophone, closing this excellent recording on a calm note. 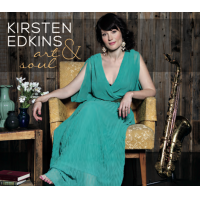 Like Nicole Glover, Kirsten Edkins debuts her considerable talent on Art and Soul. Squarely in her corner is saxophonist/composer/producer Bob Sheppard, who produces, as well as, performs on the recording. His presence is felt potently everywhere. Together, Edkins and Sheppard sketch out a Larry Goldings-Hammond B3-fueled funk fest that is as middle of the road as Golover's First Record was licking the edges.

It is with Goldings on piano and Sheppard on his excellent bass clarinet that Edkins, on soprano saxophone, finds the meaning of the post-modern blues. Edkins composed a devilishly difficult blues head for the piece that provides a wide-open space in which to solo. Sheppard solos. Demonstrating that he has no peer on the bass clarinet when it comes to more traditional forms. His solo is circuitous, dovetailing into Golding's deconstructionist take on the blues, all resolving into a well behaved coda that brings everything into consonance again. Edkins has a presence and it is a solid one.