By ALEXANDER M. STERN
July 15, 2006
Sign in to view read count
There is a powerful irony in the modern consumption of old music. When record companies first sent representatives into the Appalachians and the Mississippi Delta, the intention was to record music that the inhabitants of those regions themselves would buy. The idea that people in cities like New York or Boston would be interested in the music captured on those fragile shellac discs seemed absurd to the early talent scouts. At best, a few transplanted southerners in cities like Chicago and Detroit might be paying attention to blues and country music, but no one else.

Yet today the audience for '20s and '30s race and hillbilly records (as they were known on original release) is almost entirely composed of middle class and upper middle class, college-educated listeners. What was intended to be familiar is now considered exotic and is perceived as a gateway into a lost world.

The music of this past era was also originally assumed to be ephemeral. The individuals who recorded the likes of Son House and Dock Boggs were not scholarly, even altruistic, musicologists like the legendary John and Alan Lomax. This was not anthropology or sociology. This was business. Backwoods artists who sold well were scheduled for future record dates. If they didn't sell, they rarely recorded again. There was no sense that the music of the swamps or the mountains was being preserved for posterity. When the records sold out, they were gone, possibly forever.

As radio displaced the phonograph as the primary focus of entertainment in the pre-war era, scratchy 78s were left to gather dust in attics and spare-rooms throughout the south. There they would lie until a new generation, one that had seen a future defined by economic depression, war and changes in popular music, came looking. What was manufactured to answer a passing fancy is today collected and cherished as valuable Americana.

Disc Jockey, record producer and demon collector Joe Bussard was just twelve years old when he discovered the music of Jimmie Rodgers, the Singing Brakeman, in 1947. The revelation led the young Bussard on a lifetime obsession with the music of the pre-war era. Along with his record-collecting cronies, he took field-trips to the deep south, canvassing neighborhoods and seeking out the original owners of 78s—and buying as many records as he could carry.

The result is a collection 50,000 discs strong, a cross-section of archaic blues, jazz, country, gospel, cajun and folk recordings. It's a remarkable achievement by any standard.

Bussard has not been stingy about sharing his music either. Look in the booklet of any major release of music from the '20s and '30s (like The Anthology Of American Folk Music on Smithsonian Folkways or Goodbye Babylon on Dust-to-Digital) and you'll see Bussard's name among those who donated their precious 78s for transfer to compact disc. In 2002, Old Hat Records, a small label dedicated to the preservation of American vernacular music, released Down In The Basement, an extraordinary collection of twenty-four selections from Bussard's massive archive.

The CD presents music from musicians both obscure and renowned (Big Bill Broonzy, Reverend Gary Davis and Kokomo Arnold, all credited pseudonymously). All of Bussard's favorite genres are represented, with some fine examples of early jazz among the highlights. Early in the disc, the listener is treated to "The (New) Call Of The Freaks by Luis Russell & His Orchestra, featuring Henry "Red Allen, J.C. Higginbotham and Pops Foster. With its salacious chorus of "stick out your can/here comes the garbage man, this is a delicious example of an era when jazz was still viewed as a product of the speakeasies and brothels.

Other exemplary jazz tracks include the little recorded Bill Brown & His Brownies performing a sizzling "Hot Lips, and Fess Williams & His Royal Flush Orchestra (regulars at the Savoy Ballroom, where Williams engaged in cutting contests with King Oliver, Chick Webb and Fletcher Henderson) performing the driving "Hot Town, with its irresistible train rhythms.

Guitarist Arthur Blake and pianist Charlie Spand similarly deliver a raucous bit of boogie woogie on "Hastings Street, accompanied by Blake's laid back rap, while bassist Bill Johnson & His Louisiana Jug Band serve up a delirious concoction titled "Get The 'L' On Down The Road, with a frantic vocal from Frankie "Half Pint Jaxon and some of the hottest kazoo you've ever heard.

While Bussard clearly loves jazz (which he believes died in 1934), his one true love is country. Down In The Basement includes some fine examples of the genre, ranging from the Dixon Brothers' deadpan recounting of "The School House Fire, to the Stripling Brothers' mighty fiddle breakdown, "The Lost Child (which has served as Bussard's theme on the radio for more than two decades) and Grand Old Opry alum Uncle Dave Macon's "Beloved Solo.

In addition to jazz and country, Bussard's collection includes some amazing blues sides (the double-entendre filled "Keep It Clean by Charley Jordan is a favorite), as well as a heaped helping of gospel ("The Old Ark's A'Moving by A.A. Gray & Seven-Foot Dilly and Reverend Gary Davis' sermon-in-song, "You Got To Go Down. ) There's a smattering of cajun too for good measure (Leo Soileau's cayenne pepper reading of "Easy Rider Blues. )

The collection is accompanied by a wonderful booklet with exhaustive notes by Marshall Wyatt and several delightful anecdotes from Bussard about his collecting days. There's a good deal more to be discovered on Down In The Basement, and one hopes that Old Hat is able to put out a second volume in the near future. 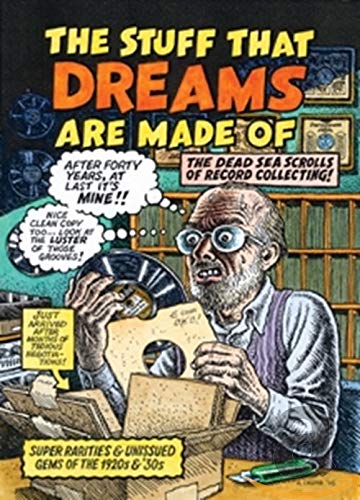 Various Artists
The Stuff That Dreams Are Made Of: The Dead Sea Scrolls of Record Collecting
Yazoo
2006

Once they've been exposed to the delights of old music, listeners often find themselves with an itch that demands to be scratched. If you've acquired the taste from Bussard's stash, or from other collections, Yazoo Records' The Stuff That Dreams Are Made Of is a perfect next step. A two disc set presented in marvelous sound, The Stuff That Dreams Are Made Of serves up 46 rarities that are well worth hearing.

The chief highlight of the set is the inclusion of previously unavailable tracks, including two never-heard-before recordings by the great Delta blues guitarist Son House. These tracks, "Mississippi County Farm Blues and "Clarksdale Moan, are outstanding—and the anthology includes many more gems.

Unlike the Bussard collection, the Yazoo set contains no jazz, but is still worth the attention of anybody who professes an interest in American music. Like the great Anthology Of American Folk Music, The Stuff That Dreams Are Made Of helps to lay bare the roots of music in the United States. Like much of the music made in America today, this collection finds its power in the fertile soil of the American south. Blues, in the form of Sleepy John Estes and Tommy Johnson, and country, exemplified by the Georgia Pot Lickers and Wilmer Watts, both originated south of the Mason Dixon line.

The color of the musicians mattered less than the fact that all of them hailed from Mississippi, Georgia, Tennessee, Louisiana and other southern states. These roots run deep in this collection. The music of Asa Martin and Roy Hobbs (on "Wild Cat Rag ) and the Kentucky Ramblers (on "Ginseng Blues ) highlight the unique contribution to American music by southerners.

The collection is handsomely packaged, although it does come in a DVD sized box which will not fit on a standard CD rack or shelf. The cover is by the legendary cartoonist Robert Crumb (himself a great collector of 78s), who also contributes a hilarious black-and-white comic on the perils of record collecting. The booklet features an amusing essay on the unique pathology of collectors by fellow-collector/headcase Richard Nevins—including the harrowing tale of the Collier Brothers, who amassed so much stuff that one of them was crushed to death by it.

The one drawback of the booklet is the complete absence of discographical information. No mention is made of when or where the songs were recorded, or on what label they first appeared. This stands in stark contrast with the Old Hat collection, which provides all of this information in its booklet.

One of the minor dangers of collecting the music of the '20s and '30s through various artist anthologies like Down In The Basement and The Stuff That Dreams Are Made Of is the risk of duplicate tracks. Between these two collections, there are two recordings which are repeated: "Ain't That Trouble In Mind by Fields Ward & The Grayson County Railsplitters and "Original Stack O' Lee Blues by Long Cleeve Reed & Little Harvey Hull.

The fact that Bussard contributed to the Yazoo collection would suggests that these two discs came from his collection (this is actually a near certainty, because both discs are one-of-a-kind rarities that Bussard, alone in the entire world, is believed to possess). Also, if you have any collections of music by Tommy Johnson and/or Dock Boggs, you likely already have the tracks by these two artists as well.

Despite a few duplicate tracks, however, the large amount of previously unheard music on both collections makes each of them worthwhile. Both sets are highly recommended for those seeking to explore the music of America's past on CD.

The Stuff That Dreams Are Made Of: The Dead Sea Scrolls Of Record Collecting