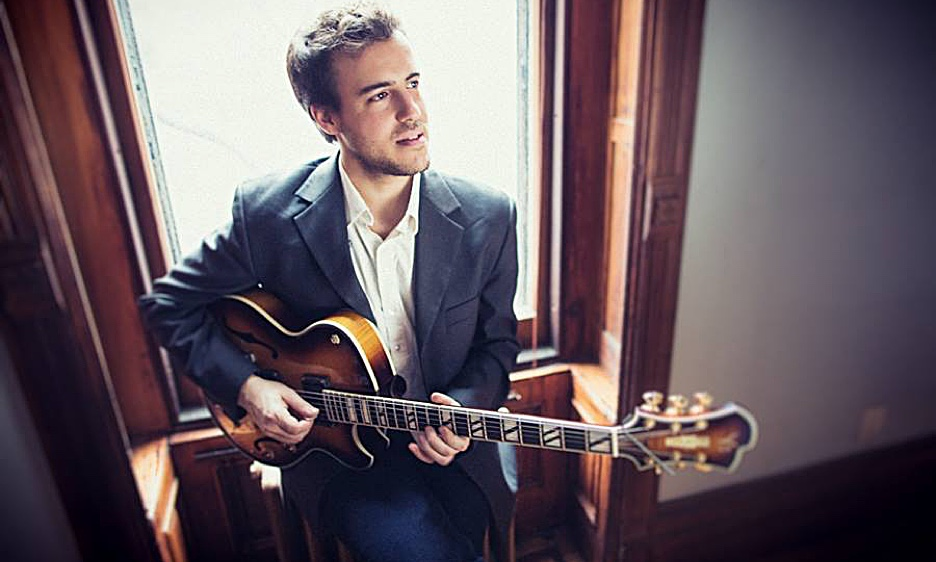 By FRIEDRICH KUNZMANN
March 6, 2018
Sign in to view read count

I just try to play guitar as pretty as I can and write down the songs and ideas that I hear in my head - I enjoy being inspired by things that move me musically.

Native Israeli and New York-based Gilad Hekselman has established himself amongst today's leading pioneers of jazz-guitar and is constantly in high demand -here, there and just about everywhere. This time around it was Hungarian saxophonist Kristóf Bacsó, who invited Hekselman to enhance his trio, taking on the role Lionel Loueke had played on Bacso's latest album Pannon Blue, for two concerts in Budapest as well as the Porgy & Bess in Vienna.

Two days prior to the Porgy & Bess concert was indeed the first time Hekselman and the Kristof Bacso Triad ever met. Repetitions and various exchanges concerning the set list had happened over the internet so the first real recital was held only hours before the concert in Budapest. The Vienna concert was therefore only their second evening of playing together, nonetheless the chemistry at hand couldn't have been more impressive, making for an evening of excellent music. Just before the show Gilad Hekselman took the time to answer a few questions:

All About Jazz: Hello Gilad and thank you for taking the time to answer a couple of questions; are you well?

Gilad Hekselman: Hi. Thank you, Yes I am!

AAJ: First off: How did this collaboration with Kristof Bacso come about?

GH: Well there was this big event in Hungary and they [The Kristof Bacso Triad ] wanted to invite a special guest. So they brought me from New York to join them for a gig yesterday in Budapest. They asked me if I wanted to play here as well, so...yeah, here I am.

AAJ: At the moment you have many different fixed musical outlets. Firstly there's ZuperOctave featuring Aaron Parks on piano and Kendrick Scott on drums. How did that collaboration come about?

GH: It's been in the making for quite a long time. The concept was born three years ago and tried with different configurations. I had the Jazz Gallery Residency commission to write new music and that's pretty much the time the whole idea was conceived. The first configuration was made up of myself, Ben Wendel, Kush Abadey and Shai Maestro and I continued to go about the new music with different people and Aaron Parks and Kendrick Scott is where it has landed.

AAJ: Do you plan on recording with this formation?

GH: We actually already recorded. There's one recording with an older constellation featuring Kush Abadey and Aaron Parks and now we just did a live record over in Muri for Newvelle Records. They [Newvelle Records] have this concept of publishing vinyl only releases in waves they call "Season" featuring extensive artwork. I find it great that they're going for that concept and another cool aspect is that after two years I'll be able to re-release the record on my own conditions.

AAJ: There's another project you've been a part of for quite a while now which is John Raymond's Real Feels and you just released your second CD Joy Ride on February 9th. Is your role in Real Feels very different for you musically, though it's also a trio?

GH: Yeah it's very different cause for one thing, I'm a sideman, so that changes a lot. I make less of the choices. But also the repertoire is different. We do a lot of covers, which I enjoy a lot as well. For example Paul Simon, The Beatles, Bob Dylan or , on our latest record, Bon Iver.

AAJ: I find your role in that trio to be quite dominant, even though you're "only" a sideman and I believe for me it lies within your very expressive and distinctive guitar tone, due, among other things, to your experimenting with all sorts of different pedals. Do you compose using the pedals or having the effects in mind?

GH: It depends. The way I usually compose is not so much with the effects in mind. I basically write a song without thinking of how I'm gonna' do it. So here's all my ideas, an ostinato here, this melody there and so on. But I'm just writing the song, not thinking about how I'm going to realize it. Then, when I bring it to a trio we start thinking about the rest; how will we emphasize which part, who leads the melody etc.. I don't even write with the guitar in mind actually.

AAJ: Seeing how your compositions and your very distinctive guitar work are quite unique, would you place yourself, your music, in a specific category or genre of jazz?

GH: You know, I just don't really care so much about what it is that I do in regards to what genre it is. I just try to play guitar as pretty as I can and write down the songs and ideas that I hear in my head—I enjoy being inspired by things that move me musically—be it jazz or rock or classical music or whatever else there is. If someone were to tell me: "Hey, that's Jazz!" I'd be like: "ok, cool!" and if they were like "Hey man, that's not jazz!" I'd respond in the same fashion "ok, that's cool!."

AAJ: When I saw you last, on your trio's 2017 European tour with Jonathan Pinson on drums and Rick Rosato on bass, you'd mentioned you'd already recorded a new album. Are we going to be able to hear that soon?

GH: Well that's the same record as the one with ZuperOctave. It's going to be a shared venture between the two bands. It's basically just a collection of songs played with different people, not so much a "this band, that band" record.

I have several records in the oven actually. Firstly there's the one I just mentioned, shared between ZuperOctave and the trio. Then the ZuperOctave only record coming out on Newvelle. Things are just going a little too slow for my taste at the moment when it comes to releasing all these records. The first record you should here about this year is yet to be named, but entirely mixed and mastered. That's the one with both bands. Then there'll be the Newvelle record. Meanwhile I also just went to the studio and recorded with Becca Stevens and Antonio Sanchez.

It's too bad these projects are taking so long to be released but at the moment that's just out of my hands. I actually feel guilty it's been so long and I don't like it either, but that's just the business side of things.

To be completely honest I've been playing with the idea of starting my own label for quite a while now, so I don't have to deal with any of that anymore. Those thoughts are definitely cooking and if no one great comes up to me and says they want to release my music anytime soon I'm just going to do it myself—take the power back!

AAJ: Could you tell me which guitar pedals you work with most at the moment? Which are your favorites?

GH: I'm very excited about this new overdrive/distortion pedal by earthquakes devices. It's called "Dunes" I believe. It can give your sound a bump while remaining clean but you can also push it into more erupting overdrive.

AAJ: You've demonstrated the following on videos I believe: A pedal you use to basically split your guitar in two. One half simulates a bass guitar and the upper frequencies remain the same.

GH: That's the Super-octave Pedal by Boss, OC-3. It has a register split. So you can tell the pedal to drop down an octave starting at some point below a given frequency.

AAJ: Two final questions for you: What albums did you listen to in 2017? Or do you even have time to listen to records?

GH: Yeah, I listen to a lot of LP's at home. The White Album was on heavy rotation. Then there's Clare & The Reasons. Julian Bream also, a fantastic classical guitarist. Some Israeli music, too: Jehudit Ravitz. Coincidentally she's Zev Ravitz' aunt, the drummer in Shai Maestro's trio.

Oh and not to forget Michael Jackson's Thriller.

AAJ: If you could freely choose a future collaborator, who would it be?

GH: There's a few people I'd like to collaborate with, but if I'd have to choose one, it would be Wayne Shorter Though I also thought it would be nice to work with Louis Cole. It would be great to have him produce one of my records. His crazy harmonies and rhythmical puns are really fun. I would also love to play with Bill Frisell, who I enjoy a whole lot.