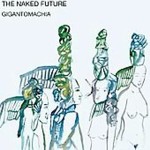 There has always been a raw, sinewy character to music performed wherever and whenever Arrington de Dionyso shows up to play his deep, woodsy clarinets. The epic narratives on Gigantomachia, interpreted by de Dionyso's latest ensemble, The Naked Future, provide no exception. If anything, the music is enveloped in an energetic tension from start to finish, enabled largely by the interplay between de Dionyso's woodwinds Gregg Skloff's bass—played arco con brio—virtually end-to-end on every song. Even the higher frequency of chord changes and harmonics added by the piano—though these break up the often dark mood of the pieces—appear to ruffle the calm of the passages they enter and create another dynamic journey for the music to run off and gurgle and complain afresh about the state of civilization.

From de Dionyso's perspective, this music is created to reflect a world that is in a constant state of mesmerism by a new yet ancient kind of iconography. This may hark back to his days of apocalyptic shouting from the pulpit of an early band, Old Time Relijun. Then, as now, de Dionyso appeared drained by the experience of the ritualized religious practice that propelled society on an almost certain path of crooked violence. And this time too his existential angst enabled the creation of long improvisations that take the form of social commentary. Their titles are self-explanatory: "We Binge on a Bloodthirsty God," "We Boil the Raven's Skull into Gold," "We Engage then Monstrous with Our Mirrors," and so on. These are extended improvisations that recall the intense instrumental collisions of Cecil Taylor, Albert Ayler, and the flock of existentialists that resurrected a dystrophic musical idiom in the 1960s.

That this music is on record implies that it is superbly interpreted. The music chooses to navigate a tonal middle passage—a route that suggests enclosure or severe restriction —to reflect, obviously, the state of mind and state of society in this day and age. De Dionyso's virtuosity is unparalleled. He appears, at times, to pick up where Eric Dolphy left off. "...Bloodthirsty God" and "...Our Mirrors" are extraordinary examples of how masterfully he can develop a whole narrative by spinning breath through the horn's tonal center and chasing it wildly through the length of the various registers—upper and lower, both. He plays excellently off Skloff's arco bass playing and drummer John Niekrasz's machine-gun rattle. But the foil for the music is almost always Thollem McDonas' piano. In "We Fly Beneath and Above the Flux," for instance, the dazzling atonal runs and angular major and minor sevenths add the kind of maddeningly distorted reflection of the song's melodic line as if the narrative were seen and heard from a shattered mirror.

On the rare occasion, the song emerges from within the seemingly random noise of each of the narrative sketches. It is almost as if an oyster is popped open to reveal a pearl.

Track Listing: We Binge on a Bloodthirsty God; We Boil the Raven's Skull into Gold; We Engage the Monstrous with Our Mirrors; We Fly Beneath and Above the Flux; We Sleep in a Rabbit Hole.

About The Naked Future