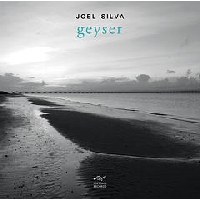 Portuguese drummer Joel Silva has organized a very fine band to bring his compositions to life. The resulting album, Geyser, is a deeply felt paean to nature and man's place within it.

From the opening track, the music (with one exception) creates mental images of wide-open spaces and the emotions of awe and humility. Within this emotional space, the core band of fellow Portuguese countryman, pianist João Paulo Esteves da Silva and bassist Antonio Quintino, assisted by two trumpeters, Joao Moreira and Diogo Duque and vocalist Sofia Vitoria produce music which, while having a different character from track to track, has real depth.

Silva has aimed very high and has succeeded in producing, through the abstract medium of music, very strong images and associated emotions of nature. His drumming is always at the service of music at hand while he rhythmically supports Quintino and da Silva, who stands out as an extremely inventive and articulate player. This is not to slight the trumpeters; they are used mostly for color and commentary, but add some nice solos throughout.

"Degelo" sets the mood immediately with open intervals that evoke large expanses, crystal clear sky. "Running Water" has a long, serpentine theme that never seems to resolve, but which nevertheless makes sense to the ear. "Geyser" is full of movement and action as would be expected, while "Terra Branca" features Quintino playing bowed harmonics over which da Silva floats a beautiful line to which Silva adds drums creating a very moving piece.

"Tuerem Tuerem" feels very empty as da Silva plucks harmonics from the piano leading to another wonderful line played against a static harmony and a sombre bass, building relentlessly to a central high point before starting again to build underneath an intense trumpet solo. "Vesihiisi Sihisi Hississa" sound related somewhat to "Geyser" during its intro, but then, out of nowhere, the trio bursts out into a torrid swing that is truly exhilarating -da Silva really kills here after which Silva finally takes a drum solo. "This Is What I Can See From Here" feels related to "Degelo" but with some intersecting counter rhythms

The second track "No Cume Do Pico" (roughly translated as "At The Peak Of The Ridge"), if taken alone is the lone "tune" and is very attractive as such. It jars only in comparison to the rest of the tracks which are much more abstract.

The closing track, "Wake Up" features an almost subliminally spoken poem by Vitoria, which is asking us, almost Zen-like, to slow down and become aware of the natural world in which we exist, but which is ignored as we live our busy lives. Surrounded by beautiful sounds, it is a fitting ending to this most moving album.