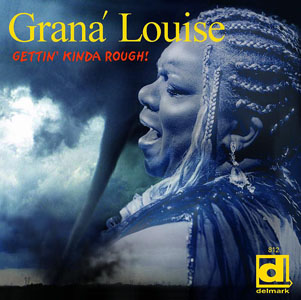 Blues singer Graná Louise has the kind of authoritative voice that broaches no contradiction, and on Gettin' Kinda Rough she delivers a batch of songs which nicely showcases her range.

In view of the sublime authority of the original, she plays with fire in covering what was Slim Harpo's "I'm A King Bee" as "Queen Bee." The original version was topped off by a killer one-note guitar solo and Harpo's chromatic harp. The overwrought guitar solo on this version suffers in comparison, being more about grandstanding than getting to the point.

"Wet Match" invites comparison to Etta James, blessed as it is not with the usual tiresome sassiness, but rather the authority born of experience. Guitarist Carlos Showers again steers proceedings in the direction of blues-rock but here the contrast between his approach and Louise's makes for an agreeable tension.

In the booklet note, Louise makes much of that element of experience which informs her work, and that's to the fore on "Where You Been?" which, at less than three minutes, has no time to get mired in sexual politics. Besides which, Louise puts the lyric across—not with anger, but with the kind of high-minded humor which might elude a lot of singers.

If anything, her reading of "Stagger Lee" is slick, and because of that the overall performance comes across as mannered and far from the kind of earthiness which would make it distinctive. Although Tom Holland's guitar is pitch-perfect and Louise delivers the lyric with the kind of authority that comes naturally to her, it goes on for too long and Louise's repetitions towards the end have the effect of draining the song of its dark undercurrent.

"Gonna Get 'Cha" finds Louise singing over the overdubbed instrumentation of Bill Syniar, but her effort is undermined by the rhythmic rigidity and the obviously synthetic nature of the backing.

In contrast, "Lead Foot Mama" is a kind of opposite to such things and makes a potent case for human spontaneity. Here the band is arguably at its most potent and Holland's guitar makes the most persuasive case through the simple expedient of making every note count.