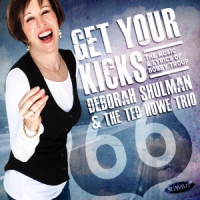 Vocalist Deborah Shulman wanted Get Your Kicks to be "a jazz album with a party vibe," which is something far different from her previous record—the wonderful (and weightier) Lost In The Stars: The Music Of Bernstein, Weill & Sondheim (Summit Records, 2012). The differing moods of each album, ultimately, reflect the musical nature of the composer(s) being covered; Bernstein, Weill, and Sondheim have "serious" written over much of their respective work while Troup's tunes belong to a cooler school.

The title of this album references Troup's most famous song, the immortal "Route 66," but that's hardly the only music of note that came from his pen; many people forget that he also wrote "Daddy," "Meaning Of The Blues," "Lemon Twist" and the lyrics to Neal Hefti's "Girl Talk." Shulman explores all of those numbers and more during this delightful Troup travelogue.

Get Your Kicks is an outgrowth of a theatrical Troup tribute show that Shulman and pianist Ted Howe started performing at clubs in 2009, so it makes sense that Howe is at the helm here; he arranged all eleven tunes on the date, from the funky "Route 66" rewrite to the smile-inducing "The Three Bears" to the less-than-cheery "Girl Talk." In each instance, Howe finds a way to amplify the meaning of the song through his writing without completely obscuring the known quantities associated with the music; that's no easy feat, but he makes it look easy.

The aforementioned desire to make this into a "party vibe" platter is realized in songs like "Route 66," "Daddy," "Baby All The Time," "Lemon Twist" and "The Three Bears," but countered with numbers like "February Brings The Rain" and "Meaning Of The Blues." Those diversions from the set course ultimately help to bring balance to a record that could have gone a bit too far in the desired direction.

Shulman's vocals are terrific throughout. She can be spunky, seductive or sedate, depending on what the song requires, and she almost always get the heart of the matter. The only place where she sounds a bit boxed in is during "Daddy." The song's lighthearted nature is lost in this funky and forceful reading. Everything else on the record feels just right, as Shulman, Howe and the superb-and-sensitive rhythm combo of drummer Dave Tull and bassist Kevin Axt come together to form the ultimate Troup troop.

You're Lookin' at Me; Route 66; Nice Girls Don't Stay for Breakfast; Daddy; Baby All the Time; Girl Talk; Lemon Twist; February Brings the Rain; The Three Bears; It Happened Once Before; Meaning of the Blues.