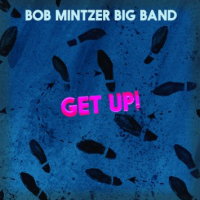 Funk and R&B are the dominant sonic strains on Get Up!—saxophonist-composer Bob Mintzer's twentieth big band release overall and his fifth for the MCG Jazz imprint.

In October of 2014, Mintzer took to the stage for two nights at Pittsburgh's Manchester Craftsmen's Guild, armed with some of his grooving big band arrangements and accompanied by a group of his heavy hitter musician friends—Yellowjackets, big band mainstays, and studio greats among them. The music they made, captured here for all to hear, is straight-down-the-middle, solo-heavy stuff, built from the bottom up with slick underpinnings, tight section work, supportive background riffs, and punchy interjections. Mintzer expertly plays section against section, creating tongue and groove connections between brass and reeds while the rhythm section lays down the foundations.

Most of the music on Get Up! sits in the same stylistic realm, but Mintzer keeps things interesting by investigating different subcategories under the funk and R&B umbrella(s). There's the James Brown-inspired title track, an ode to Oakland funk ("Land of Oak"), a sleek, flute-enhanced take on a Wayne Shorter composition ("Elegant People"), an expansion on a number originally written for the Yellowjackets ("Civil War"), three late '60s soul classics ("It's Your Thing," "I Thank You," and "Sing A Simple Song") and more. And then there are the soloists to contend with. Mintzer leaves plenty of room for his high profile band mates to blow, a move that proves to be a smart one. More than half of the seventeen musicians involved in the project get to shine at one time or another, bringing their unique gifts into sharp focus. Highlights include a fiery solo from trumpeter John Daversa ("It's Your Thing"), a scorching guitar spot from Ray Obiedo ("Sing A Simple Song"), a hip showing from pianist Russell Ferrante ("Civil War"), and an adrenalized performance from the leader ("Truth Spoken Here").

As unidirectional sets go, this one is pretty strong, highlighting groove music in various forms while showcasing some major talent. With Get Up!, Mintzer proves, once again, that he's a force to be reckoned with in the big band world.

Get Up!; Land Of Oak; It's Your Thing; I Thank You; Sing A Simple Song; Truth Spoken Here; Elegant People; Civil War; Yeah Yeah Yeah.