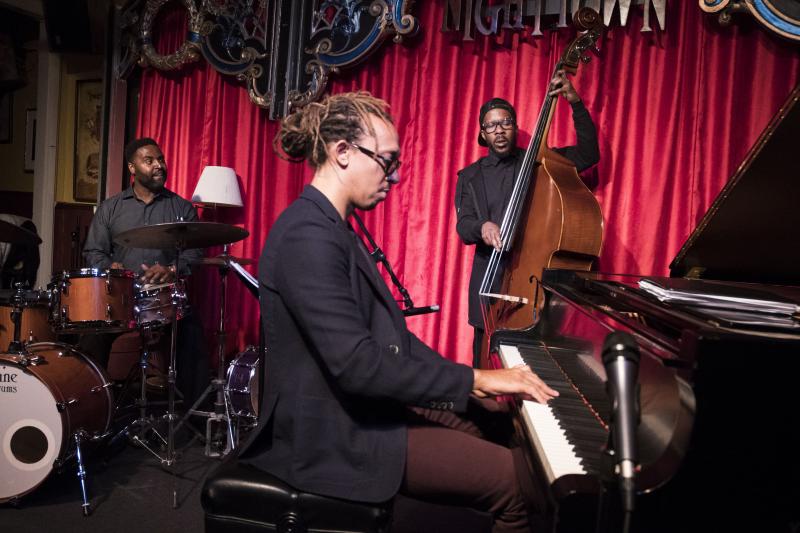 Much like the politics of today, everything seems to come in extremes. So much of what passes for modern jazz today veers too far to the left, often opting for the esoteric and anarchism merely for the sake of being different. As an analogy, one could be different by merely building a house with no roof. But in the final analysis, such an effort would just not prove serviceable. And therein we find the rub. Audacious moves without real purpose largely signify nothing. So while many of his peers are heading down the one-way street of pretention, what makes pianist Gerald Clayton such a refreshing talent in the contemporary diaspora is his ability to forge a singular voice within the framework of the vernacular. He does this while never forgetting the emotional connection that is at the heart of the deepest musical expression.

Since the first time this reviewer caught Clayton with his trio in Cleveland back in 2009, the pianist has made a rapid ascent in terms of his development. Supporting the release of his latest recording, Tributary Tales, Clayton recently delivered the goods to a packed house at Nighttown with his longtime associate Joe Sanders on bass and the musically daring Kendrick Scott on drums. The mix of tunes was a great blend of the new material and previous compositions, with Scott's determined support making for a more forward approach to the music than what is found on the actual album.

The great Cedar Walton's "Hindsight" was a solid opening gambit, with Clayton demonstrating his penchant for solo development in a manner that was highly logical, but also teaming with excitement as he built his statement from start to finish. Although "Dusk Baby" speaks in shades of coolness on the album Life Forum, the trio's updated version highlighted the groove factor more prominently and the results were splendid. The first set wrapped up with "Blues for Stephanie" and the standard "My Shining Hour." On the former, Scott impressed with sagacious drum fills that underscored his musical approach to the instrument. As for the latter, Sanders surprised everyone by vocalizing the melody in tandem with his bass.

The second set kicked off with a Monkish original entitled "Wakeful." Avoiding any coy allusions, Clayton opted for a well-told story of his own aided and abetted by the ever alert Sanders and Scott. Another fine piece from the new album, "Patience Patients" offered its musical equivalent to literary stream-of-consciousness, Sanders weaving in and out of Clayton's moody interjections. This segued beautifully into what sounded like the Horace Silver ballad "Peace," which put the spotlight on the bassist for an extended solo.

By this point, the trio had coalesced into a well-oiled machine in full flight, the energy building for what would be a required encore. The gospel-tinged "Soul Stomp" served this function perfectly as Scott once again asserted his role in the group beyond that of mere time keeper or accompanist. What a joy to hear these three distinct artists come together with a common purpose that put heart and connection at the core of their delivery.