By ERNEST BARTELDES
July 23, 2012
Sign in to view read count 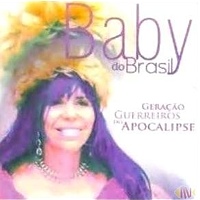 Over her four-decade career, Baby do Brasil (formerly known as Baby Consuelo) has constantly reinvented herself artistically. As a member of Brazil's seminal Os Novos Baianos, she helped (with the blessing of Joao Gilberto) shatter genre barriers with their fusion of rock, samba and other sounds. As a solo artist starting from the late 70s, she continued mixing things up by bringing northeastern Brazilian music to the mainstream while introducing new standards to the country's musical canon.

On her first solo release in a decade, she emerges with a devotional record that explores various musical tendencies that run the gamut from pop, rock, samba and bossa. Recorded both in Brazil and the United States, the disc includes an impressive roster of musicians, including drummer Claudio Infante, percussionist Marco Suzano, harmonica player Flavio Guimaraes and master guitarist Nelson Faria.

The CD opens with "Toda Honra e Toda Gloria," a funk-tinged pop tune that blends the Afro-Brazilian sound of the berimbau with various Middle Eastern influences. It is a signature Baby do Brasil tune, rich with guitar and percussion behind her powerful voice. Among the highlights are covers of Leiber/Stoller/King's "Stand by Me" with the lyrics slightly modified to fit a Gospel format, and also "Amazing Grace," both played with an acoustic bossa arrangement featuring dexterous solos from Faria. Also notable are "A Setima Trombeta," a straight ahead jazz tune with sparse lyrics that allow do Brasil and the musicians to stretch and improvise around the melody, and the trilingual (English, Portuguese and Spanish) "I Love You Jesus, a Brazilian funk-samba tune that features backing vocals by daughter Nana Shara and impressive solos from bassist Andre Neiva and guitarist Lucas Nossa Domingues.

Closing the album is the festive "Santo de Israel," a party-like tune that is reminiscent of the sound she has played on the famous "trios eletricos" during Carnaval in Bahia. They lyrics might talk about Jesus, but the music has a groovy, dance-inducing feel. Also worth checking out is "A Verdade," a blues-tinged anti-drug ballad that showcases do Brasil's fantastic vocal chops.

Geração Guerreiros do Apocalipse (which translates as "Apocalypse Warriors Generation") is a strong comeback for do Brasil, and proves that she is still a force to be reckoned with in the Brazilian music scene.

About Baby do Brasil