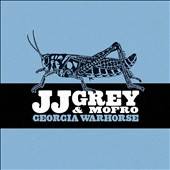 JJ Grey's eleven new tunes for Georgia Warhorse, named for the notoriously resilient Southern lubber grasshopper, reflect and broadcast his love for the rustic Florida backwoods where Grey and his family have lived for generations. Grey not only wrote all the tunes but played just about every instrument, except for the slide guitar that Derek Trucks (like Grey, a Jacksonville native) slices and dices into the closing "Lullaby," and sang all the vocals except for one duet.

From start to finish, Grey & Mofro barbeque meaty slabs of steaming hot blues, rock and funk. They cook from the opening "Diyo Dayo" due to Grey's wickedly barbed guitar hook and vocal that sounds equal parts thick as molasses Southern drawl and urban street rat snarl. And they keep the music cooking all the way through "The Hottest Spot in Hell," a diatribe that scalds pimps, slave owners and other men who abuse women, highlighted by a voicebox guitar solo and a climactic guitar rampage that crunches its chords into flat sheets of metallic sound.

In between, you'll find all the ferocious and tender beauty of Grey's beloved Florida natural everglades. Contemplations of nature in "King Hummingbird" and "Beautiful World" consider the reflection of his own place within this natural world; "Gotta Know," an old-sounding gospel blues dirge, also sings to nature as part of this dialogue. Musically, "Gotta Know" illustrates how successfully bands like the The Rolling Stones wove classic blues into contemporary rock threads; lyrically, "I finally understand/ It can't be understood" presents a man maturing down his own path to wisdom.

In an industry full of sexual metaphors, few have sounded more juicy and delicious than "Ya sweet as a mango and steamy like the Congo" from Grey's sensuous "Slow, Hot & Sweaty," a torrid groove that lays down your stroking rhythm.

The title track is one monstrous electric blues with bad intentions. On its surface, a tribute to an insect that's difficult to kill; at its core, a tribute to a way of life and place for living that seems to endure despite constant flurries of manmade and natural tragedies.

Singing out in a different voice emanating from the American south, "The Sweetest Thing" sounds like classic Stax Records from the label's Memphis soul peak, a hearty vocal duet between Grey and reggae icon Toots Hibbert. "Toots is the greatest soul singer I've ever heard and one of my biggest influences," Grey explains.