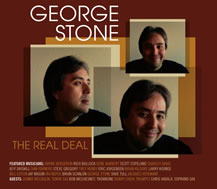 Every once in a while the stars align, the wheel of fortune spins precisely and listeners are the happy recipients of a big band album that is remarkably engaging and spectacular from start to finish; in other words, The Real Deal. This is one of those unique and memorable occasions, one in which leader George Stone has not only recruited a squadron of superlative sidemen (and guests) but has given them exemplary music to play, some of it written and all of it arranged by Stone himself.

As for the tenor of the music, Stone's breezy opener, "D-Bop," and robust finale, "Straight Ahead," set the compass securely to "swing" and erase any doubt about his purpose. Sandwiched between are three buoyant originals by Stone, a quartet of familiar standards, Louie Bellson's "Peaceful Thunder" and Sonny Rollins' "Doxy." Guest trombonist Bob McChesney is astute and eloquent on Ray Noble's "The Very Thought of You," trumpeter Bobby Shew a mirror image on "When Sunny Gets Blue." Two more guests, tenor Donny McCaslin and soprano Chris Vadala, shower sparks before trading well-aimed volleys on "Doxy," and McCaslin is showcased with Stone, guitarist Larry Koonse and drummer Dave Tull on Cole Porter's "I Love You." Guitarist Steve Gregory, sitting in for Koonse, spars with alto Gene Burkert on Stone's Basie-inspired "Count Me Out."

Stone's electric piano introduces "Doxy," and he moves to trumpet to complement Burkert with a persuasive solo on "Straight Ahead." Tenor Bill Liston adds trenchant statements on "D-Bop," "Peaceful Thunder" and Duke Ellington's "I'm Beginning to See the Light" (the last with trumpeter Charley Davis}, while Burkert, Stone and tenor Brian Scanlon shine on Stone's even-tempered salute to Jeru, "Mulligan's Nest." Tull, Stone, Koonse and bassist Trey Henry comprise a perceptive and powerful rhythm section, and it goes without saying that the ensemble, with such luminaries as Davis and Wayne Bergeron leading the trumpets and blue-chip players in every other seat, is razor-sharp and clean as the proverbial whistle (as is the album's lucid and well-balanced sound).

Stone's band, which has remained more or less intact since it was formed better than a decade ago, has recorded at least three earlier albums, each of which has much to recommend it, but with all due respect to them, this latest session is The Real Deal and as such is warmly endorsed.

Into The Open, Colorado-based composer / arranger / educator / tenor saxophonist Fred Hess's second album as leader of his own big band, opens strongly with four numbers tucked firmly in a straight-ahead pocket, encounters a brief unmelodious pothole or two on the sometimes spasmodic "Alison's Dream," but quickly recovers its equilibrium on an adventurous "Journey to Sentosa." A second sonic aberration, the offbeat tone poem "Baby Clefs Birthday," precedes the session's 15 minutes-plus finale, "Ninth House," a picturesque albeit sometimes strident homage to the music of John Coltrane.

This is by way of saying that Hess clearly achieves his goal of "looking back and thinking forward," as he did with the album's precursor, Hold On, recorded in January 2009, one year before into the open. While Hess is a modernist, he doesn't conceal his fondness and admiration for the big-band tradition, building on the legacy of such giants as Bill Holman, Gerry Mulligan and others on the straight-arrow "Sooz Blooz," "Home Base" and "Norman's Gold." Hess wrote and arranged all of them, as he did everything else on the album save for "See You (Illuma Soma)," which blends a pair of lovely melodies written, respectively, by Jean Bardy and Dennis Goodhew. As noted, every theme is enticing and plain-spoken aside from short-lived sections of "Alison's Dream" and much of "Baby Clefs Birthday," whose singular themes depict an excursion to a park, a "dark cloud of menacing crickets," the abduction of Baby Clef by a robber, his apprehension (complete with "Dragnet" theme) and a discussion of the episode by family and friends at a favorite coffee house. That's a lot to swallow in less than four minutes, and so is the music.

If Hess didn't round up every world-class sideman in Colorado to equip his band he must have come close, starting with his working quartet (Ron Miles, trumpet; Ken Filiano, bass; Matt Wilson, drums) and including such heavy hitters as trumpeters Brad Goode and Alan Hood, trombonists The Atomic Fireballs and Nelson Hinds, saxophonists John Gunther and Peter Sommer, and pianist Marc Sabatella. Tenor Sommer is the only newcomer, replacing Dominic Lalli from Hold On. He solos with Hood on "Ninth House." Ball, Hinds, Gunther, Sabatella, Miles, Filiano and Wilson all have their moments in the sun, while the versatile Goode, who plays both lead and jazz, is front and center with Hinds on the rockin' "Home Base" and Filiano on "Alison's Dream." When soloists (including Hess) aren't doing their thing, the ensemble is rock-solid, as is its resourceful rhythm section.

Once again, Hess has accomplished what he set out to do: honor the legacy of big band jazz while moving it forward into a more contemporary framework. If albums such as this signal the future of big band jazz, that future seems bright indeed. 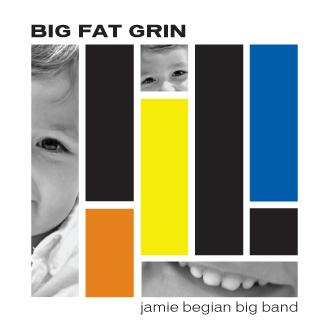 In his brief liner notes to Big Fat Grin, the second album by his New York-based band, composer / arranger Jamie Begian writes that what is presented therein is "serious yet fun art music with a sense of humor." Serious it is; art music, evidently. As for the humor, that's clearly a matter of opinion, as humor in music rests explicitly in the eye (make that ear) of the beholder. What matters, from a reviewer's perspective, is whether the music is admirable on its own terms. The answer, for the most part, is yes, although there are times when it tends to overstay its welcome (three of the album's nine tracks are more than eight minutes long, two more than ten).

Most of it, Begian says, was written in 2003-04 (the exceptions are "Suddenly, Summer Falls" and "Funky Coffee") when his "compositional voice was solidified." That includes the four-part suite "Tayloration," which encompasses nearly twenty-five minutes of the album's hour-plus playing time. Rounding out the disc are "Halay," which sounds much like an Israeli (or Middle Eastern) folk song, the shadowy "Patience" (featuring trumpeter Dave Scott) and "Big Fat Grin," which encloses the package in bright-colored finery enhanced by guitarists Begian and Bruce Arnold.

"Funky Coffee," as its name suggests, is basically down-to-earth and straight ahead, with spunky solos by (and sharp interplay among) alto saxophonist Marc McDonald, trumpeter Tom Goehring and trombonist Deborah Weisz. The leisurely "Summer Falls," on which Begian, flutist Dimitri Moderbacher and flugel Jason Colby share blowing space, has a splendid intro underscored by Ben Kono's oboe and a peaceful ambiance that leads to the more spirited temper of "Tayloration One," each of whose four sections provides room for a trombone solo: in order, Jeff Silverbush, Paul Olenick, Weisz and bass trombonist Max Siegel, the last two of whom use mutes to exemplify their purpose. Soloists on "Halay" are clarinetist Moderbacher and drummer Peter Retzlaff, while Kono (tenor sax) and bassist Dave Ambrosio are out front with Begian and Arnold on "Big Fat Grin."

As on his first album, Trance, recorded a decade ago in 2001, every number on Big Fat Grin was written and arranged by Begian, and as on Trance, Begian shows he belongs in the upper echelon of younger-generation big band leaders, composers and arrangers. While his music isn't always easy to digest, once swallowed it has a generally pleasing taste which bolsters the opinion that more of the same would be in no way disagreeable. 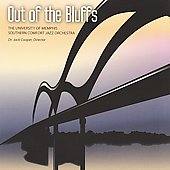 Out of the Bluffs

Southern Comfort is a splendid name for the University of Memphis Jazz Orchestra, as the music on its new album, Out of the Bluffs, elicits a feeling of the unassuming warmth and hospitality that are an integral part of southern life and culture. Even the better-known numbers (Thad Jones' "Low Down," Oscar Pettiford's "Tricotism," the standard "A Beautiful Friendship") flow as smoothly as a soft rain carrying its invigorating sustenance to fields and meadows parched by the summer sun. In other words, music that's easy on the ears while focused on the heart.

In assembling the session, director Jack Cooper calls upon almost every resource at hand, from alumni and graduate students to undergrads, faculty members, specially commissioned works and even himself. Alumni James Williams and Mulgrew Miller are responsible for two compositions ("Alter Ego," "For Those Who Do"), while grad student David Peoples wrote "Out of the Bluffs" and arranged Mary Ann McSweeney's "Without Changes." Two more grad students are represented: Chris Parker, who arranged "A Beautiful Friendship" and Mike Fahn's "The Burren," and Matt Tutor, who scored Miller's "For Those Who Do." Cooper arranged "Tricotism" and Tribal Tech's "The Necessary Blonde." Completing the program are Bill Russo's evocative "Portrait of a Count," on which trumpeter Paul McKinney (cleverly paraphrasing Clifford Brown) sits in for the great Conte Candoli, for whom it was written, and Jones' Basie-like "Low Down," the first chart played by the Thad Jones / Mel Lewis Orchestra when it began its historic run at the Village Vanguard in 1966.

Bassist Takahiro Maroooka is showcased on "Tricotism" and offers congenial solos on "Necessary Blonde" and (uncredited) "Beautiful Friendship," which opens the album at an agreeably moderate tempo. The ensemble, which is solid most of the way, seems a tad unsure of itself toward the end of that number, but recovers nicely on "Alter Ego" (arranged by pianist Justin Cockerham who solos with guitarist / faculty member Chip Henderson). The walking "Bluffs" was written to feature trombones, in this case the talented duo of Victor Sawyer and Anthony Williams, the chorale-like "Changes" for Fahn by his wife, McSweeney. The soloists are trombonist Williams and guitarist Noah Hernandez. "Blonde" is a feature for the rhythm section (Cockerham, Marooka, Hernandez, drummer Jeremy Warren). Cockerham and Hernandez are out front with tenor saxophonist Josh McClain on "For Those Who Do," while Marooka, Williams and Hernandez share blowing space on "The Burren."

UM's Jazz Division, which has been around for more than four decades, clearly has a solid game plan and an eye toward moving ever forward and upward. Out of the Bluffs displays the Southern Comfort Jazz Orchestra in the best possible light, and is recommended as a high-class model of the kind of music that contemporary college-level Jazz ensembles are capable of producing. 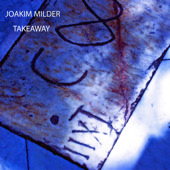