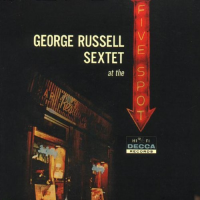 Conceptualist and composer George Russell’s place in jazz history has always been a bit tenuous at best. Few really understand the implications of his Lydian Chromatic concept and up until now very few of his early recorded masterpieces have been available to all but the most diehard of vinyl collectors. Following the seminal 1957 Jazz Workshop album for RCA Victor, Russell would jump ship for the popular Decca label where he would cut another four neglected gems. Near the end of this period, Russell formed an important sextet of talented youngsters, took the group into New York’s Five Spot, and then went into the studio to cut this tour de force (yep, despite the album’s title, this is a studio session).

Of the musicians assembled here, all of them are uniquely gifted, however the most familiar names will be trombonist and educator David Baker, bassist Chuck Israels, and drummer Joe Hunt. Exceptionally gifted, tenor saxophonist Dave Young proves to be a brawny soloist with a full-bodied tone not unlike that of Booker Ervin. Russell imparts the piano support for these swinging and extended compositions that also look towards the greater harmonic and melodic freedom that would become the fodder of “new thing” musicians as the ‘60s progressed. Make particular note that two of Carla Bley’s early works, “Dance Class” and “Beast Blues,” are part of the program.

There would be one more Decca album before Russell would move on to Riverside, where such albums as Stratusphunk, Ezz-thetics, and The Outer View would take their place among his renowned works. Belatedly add At the Five Spot to that list and bask in all its grandeur.