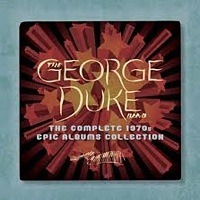 The six albums comprising this collection of George Duke's 1977-80 Epic releases are of uneven quality—as the keyboardist himself acknowledges in the liner booklet—but they make an interesting historical artifact. From a "jazz" point of view, five of the discs approach irrelevance, but the sixth, 1980's samba-informed A Brazilian Love Affair, is a classic which still has alluring legs.

The back-story: Duke is one of those keyboard players who began their careers in the mid-1960s playing acoustic jazz and who shifted direction in the early 1970s towards more chart friendly, electric styles. Duke first attracted attention playing in alto saxophonist Cannonball Adderley's group, before switching to fusion, and then to a funk hybrid of the perfumed, as opposed to down-home variety. A composer/producer with good ears for a potential hit, Duke has enjoyed a lucrative career; the trade-off has been that, as he moved inexorably towards the middleground, his music became steadily less interesting and substantial.

The Complete 1970s Epic Albums Collection tracks the three years which saw Duke move from fusion to funk, facilitated by the financial and commercial clout of Epic, to which he signed in 1977. It includes six albums, each in facsimiles of their original sleeves: From Me To You (1977), Reach For It (1977), Don't Let Go (1978), Follow The Rainbow (1979), Master Of The Game (1979) and, best of them all by a country mile, A Brazilian Love Affair, recorded in Brazil in 1979.

Duke's idea for A Brazilian Love Affair was to take Brazilian rhythms and combine them with the fusion and funk material his band had been playing over the last few years. For the album, the band was augmented by percussionists from singer Milton Nascimento's group, along with Brazilian guest vocalists including Flora Purim and Nascimento himself, who sings on the closing "Ao Que Vai Nascer," which was not included on the original LP. It worked out well: the Brazilian musicians inject a vital authenticity and Duke's polished funk sits comfortably with the prevailing, polished Brazilian aesthetic.

From any perspective, A Brazilian Love Affair is the meatiest of all Duke's Epic albums (he released another five LPs on the label between 1981-84, including his first two made with bassist Stanley Clarke as the Clarke/Duke Project). The music on the earlier quintet of albums in The Complete 1970s Epic Albums Collection has worn less well: it is amiable, slickly produced, mainstream funk.

Duke gives good liner notes, as he demonstrated with his album commentaries for My Soul: The Complete MPS Fusion Recordings (MPS/Universal Music Group, 2008), the four-disc box set which collected his fusion recordings of the early to mid-1970s. His commentaries for The Complete 1970s Epic Albums Collection—upwards of 600 words on each of the six discs—have an attractive streak of self-criticism. Discussing his overblown arrangement of the title track on From Me To You, for example, Duke suggests that he might have been carried away by the budget, the biggest he had yet received. He says that his Epic product manager, having listened to "From Me To You" for the first time, asked him if he really felt that "grand musically." Duke's judgment, four decades later, is that, while the album has its high spots, overall it does not make a "cohesive musical statement."

There is an enjoyable Spinal Tap moment in the notes for Don't Let Go, where Duke describes the band's shock at returning to the US from a European tour to find itself no longer playing the 150 to 500 seat clubs it was used to, but booked into 4,000 seat stadiums coast-to-coast (the breakout single, "Reach For It," had hit while the band were overseas).

As Duke's chronicle of the six Epic LPs unfolds, he candidly admits that he recalibrated the band's music, from funk 'n' fusion to radio orientated funk, in order to capitalize to the max on his chart success. In other words, his music became audience rather than artist-driven: the biggest "sin" in jazz demonology. In the notes for Don't Let Go, Duke writes: "We tried playing the same eclectic show that we normally played, but found that didn't work with our new largely black audience....They didn't care about all that pseudo Brazilian/Jazz/Funk/Rock experimental music." Duke called a band meeting and told the musicians: "We need to change our image and alter the music." Later, writing about Master Of The Game, he says: "By this time I'm sure you realize that I had a formula for recording....I would include at least one instrumental track that featured me playing synth and was more musically progressive, a funk tune or two, and several songs that utilized a lot of vocal harmony."

The last album in the set, A Brazilian Love Affair, however, is clearly Duke's favorite, the one that he thinks has "stood the test of time" the best. He is right.

From Me To You

Tracks: From Me To You; Carry On; What Do They Really Fear; 'Scuse Me Miss; You And Me; Broken Dreams; Up On It; Seasons; Down In It; Sing It.

Tracks: The Beginning; Lemme At It; Hot Fire; Reach For It; Just For You; Omi (Fresh Water); Searchin' My Mind; Watch Out Baby; Diamonds; The End; Bring It Home.

Tracks: Party Down; Say What You Will; Funkin' For The Thrill; Sunrise; Festival; I Am For Real; Straight From The Heart; Corine; Pluck; Follow The Rainbow.

Master Of The Game

Tracks: Look What You Find; Every Little Step I Take; Games; I Want You For Myself; In The Distance; I Love You More; Dog-Man; Everybody's Talkin'; Part 1 The Alien Changes The Stick; Part 2 The Alien Succumbs To The Macho Intergalactic Funkativity Of The Funkblasters.