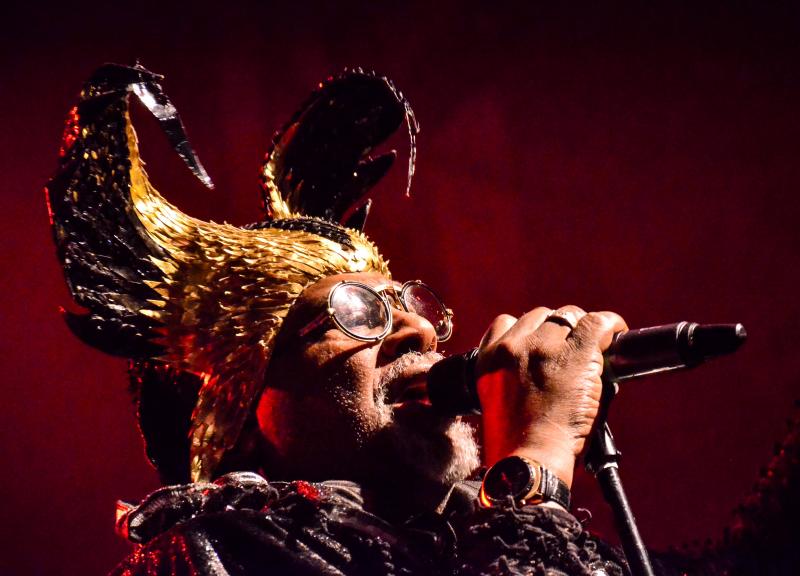 George Clinton is the reigning Godfather Of Funk. The seventy-six-year-old singer, songwriter, bandleader, record producer and founder of the Parliament-Funkadelic collective continues to tour and put his stamp on contemporary music. In fact, Clinton won his first-ever Grammy Award in 2016, for his work with Kendrick Lamar on the To Pimp A Butterfly album (Top Dawg/Aftermath/Interscope, 2015).

A member of the Rock 'n' Roll Hall of Fame (he was inducted in 1997, along with fifteen other members of Parliament-Funkadelic), Clinton is a visionary who made a definitive musical statement by inventing a funky eclectic version of funk, soul, acid jazz and R&B that draws on outrageous humor, sci-fi, outlandish fashion and psychedelia that remains influential more than forty years after its creation. Clinton, the visionary, is also responsible for inspiring and shaping many current artists across numerous genres including rap, modern-day funk, R&B, rock and alternative.

On a pleasant Sunday evening in mid-February, following a powerful warm-up set by special guest Miss Velvet & The Blue Wolf, Clinton and his big band delivered a stunning, other-worldly evening of funkalicious musical soundscapes at Huntington, NY's Paramount. The multi-generational, multi-cultural audience ate it up and bopped the night away from the first chords of "Mothership Connection" to the last note of a tour de force version of "Atomic Dog." Clinton's performance started on an unbelievable visual high note at precisely nine pm, when the bandleader made a spectacular entrance wearing a Viking-inspired horned crown. Eventually, he switched the crown for his signature black fedora. The stage was crowded with a dozen musicians and dancers, virtually all of whom were dressed in outrageous garb. Clinton and the band played a career-spanning set of songs that touched on almost every musical genre imaginable—funk, soul, R&B, rock, pop, fusion, jazz and much more. The performances jammed and wound their way around using the basis of the original songs to create new and interesting takes on old favorites. Highlights included the renditions Clinton's best-loved songs—"Get Off Your Ass and Jam;" "One Nation Under a Groove;" "Flashlight," during which the frenzied crowd accompanied the musicians on the titular chorus; "Free Your Mind and Your Ass Will Follow;" "Dirty Queen;" "Maggot Brain" and "Give Up the Funk (Tear the Roof Off the Sucker)" which kept the crowd (even those with assigned seats) on its feet and grooving to the beat throughout the performance.

A George Clinton show is an audience participation event. The show was billed as part of the Mardi Gras Madness Tour and many concert-goers arrived dressed in full Mardi Gras regalia and ceremonial dress. Purple, gold and green were the colors of the evening and Halloween-like costumes abounded. Regardless of their garb, many crowd members who spent the evening dancing the night away were covered in sweat. It was obvious that a good time was had by all.