By JIM SANTELLA
December 4, 2005
Sign in to view read count 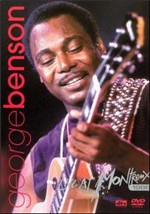 This concert is a lot of fun for those who want to enjoy George Benson interpreting pop and smooth jazz. He's exciting, and he really gets into his songs. Solid vocals and smooth instrumentals carry the audience through moderate romps and lush ballads that focus on the leader from every angle.

Synchronized horns, varied percussion textures, throbbing electric bass and rhythm guitar surround Benson with layers of consonant harmony and mellow rhythms. The Montreux audience loved it. One look at the instrumentation and you can see that he came to Switzerland fully loaded.

Benson sings 11 of the 15 songs and plays thrilling improvised guitar on the rest. Take your pick. He's fun to watch doing it both ways.

Dressed in black, sleeveless, with red and white ID neckwear and pendants, Benson appeals to a broad audience. He keeps the band in check, making sure that they maintain a supporting role for his starring performance. And it works. Phrasing proves seamless, balance remains spot-on, and the leader gives his audience what they came for.

Love Ballad features Benson's trademark vocal scatting with guitar. Nobody does it better. Like most jazz fans, I prefer his wordless vocals with unison guitar over his pop vocals. His "Beyond the Sea pales compared to Bobby Darin's original. Nevertheless, seeing Benson's face light up as he delivers those memorable lyrics has a powerful effect on everyone who is watching.

Jose Feliciano's "Affirmation allows the guitarist an opportunity to interpret a smooth jazz instrumental with charm. He rolls it out, steps on the gas, and delivers an emotional guitar tirade.

Benson's best instrumental comes with an up-tempo samba, "My Latin Brother, that demonstrates his fiery chops as he improvises fiercely over a spicy theme.

The leader gives his band ample solo time and announces each soloist to the audience. The camera seems to have caught everything in this program: from Benson's close-ups when it counts the most, to the little things like Vicki Randle playing the tambourine with one foot while concentrating with her other three limbs on the rest of her percussion setup to provide a suitable accompaniment.

Benson closes the program with a thrilling wordless vocal and guitar unison for "On Broadway, which takes the band out in style. He sure knows how to give his audience a night of fun.

Tracks: Feel Like Making Love; Off Broadway; Weekend in L.A.; Lady Love Me (One More Time); Love Ballad; Beyond the Sea; Affirmation; My Latin Brother; Love X Love; In Your Eyes; The Greatest Love of All; 20/20; Never Give Up on a Good Thing; Turn Your Love Around; On Broadway.