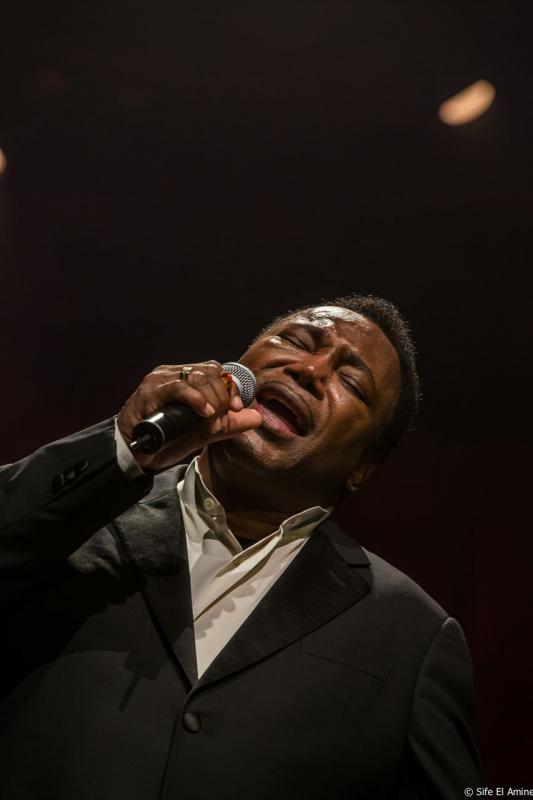 If ever there was an ambassador of jazz love songs, it would definitely be George Benson. At age 70, the guitarist/vocalist is still driven with heated passion to sing love ballads. For his second visit to Morocco, Benson performed with the Ochestre Symphonique Royal, offering a memorable evening to an audience predisposed to reviving Nat King Cole's repertoire.

Part of the Mawazine World Music Festival, the concert was held in the ancient Mohammed V Theatre in Rabat. The choice of this venue was perfect to host an orchestral rendering of Nat King Cole's hits. The lofty stage, the towering red curtains and the natural reverb enhanced the tribute's majesty.

As the only jazz artist in the Mawazine Festival lineup, Benson had to please an audience less specialized in jazz, but ready for the burning sensation of his strong, dramatic voice. In such context, Benson joined with The Moroccan Royal Symphony Orchestra. On this second performance with orchestra since 2008, Benson was at ease revisiting Cole's hits. Indeed, pouring old wine into new bottles was a successful method of enchanting a mature audience waiting for love to come back home.

With a richly nuanced voice, Benson opened the set with "Walking My Baby Back Home," veering next to the very smooth "Nature Boy." He then whipped the crowd up into a frenzy with a fast rendition of "Straighten Up and Fly Right." Marked by a fast tempo and instrumental virtuosity, the song was a total switch from the orchestral take to a more purist form of jazz, enhanced by Benson's scatting.

Back to romanticism, Benson introduced the Moroccan Choral group, putting it to work on songs such as "Unforgettable," "Mona Lisa," "Smile," and "When I Fall in Love," the latter performed in duet with soprano Janey Clewer in a operatic manner. This was especially well-received by the audience, who cheered wildly.

Benson knew his audience was dying to hear him sing his '70s and '80s hits, but he preferred to increase the excitement about "The Benson Party" by introducing "Rambling Rose" as a success story based on Ray Charles' suggestion to Cole to play a country song; he then made a smooth transition between Nat King Cole's music and his own, with a funky rendition of "Nature Boy."

For his party, Benson reappeared in a casual dress and grabbed his Ibanez guitar to release a flow of sharp sounds, announcing "Breezin.'" From that moment on, Benson impersonated the guitar man for the remaining funky songs, including "Give Me the Night" and "Turn Your Love Around," as well as some improvisation. He sang less, playing more guitar with a smashing force and emphatic sense of rhythm.

The crowd roared, danced and totally adapted to the changing mood of the soirée concocted by the versatile guitarist, bebop and pop singer, and overall entertainer.