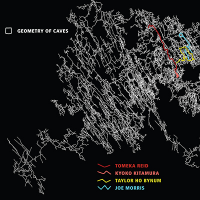 A free-jazz veteran meets up with three musicians quickly establishing their own impressive legacies on the bewitching Geometry of Caves, a wholly improvised affair that offers plenty of intrigue and vigorous four-way dialogue during seven imaginative pieces.

Guitarist Joe Morris's long recording career has seen him working with giants like William Parker, Anthony Braxton and Ivo Perelman, but he's also connected with a newer generation of players, including folks like Nate Wooley, with whom he recorded Ninth Square (along with another free-jazz titan, Evan Parker) in 2015 (on Clean Feed). He's also been featured with two of his younger counterparts on this album: cellist Tomeka Reid, who played with Morris and Jim Baker on Dave Rempis's Nettles (Aerophonic Records, 2016), and cornetist Taylor Ho Bynum, with whom he teamed up with bassoonist Sara Schoenbeck on Next (Porter Records, 2011). The somewhat less-familiar member of the quartet on Geometry is vocalist Kyoko Kitamura, although with a resume that includes projects with Braxton and Steve Coleman, she's hardly new to this kind of venture; and she's also recorded with Bynum on a project from 2009, Madeleine Dreams (Firehouse 12). There's thus a good deal of mutual history among the four musicians on this release, and it shows through their meticulously-developed improvisations.

The recording quality of the album is first-rate, with clear separation between the musicians, something that's especially welcome on a release in which dialogic interaction is so crucial. Bynum occupies the far-left channel while Kitamura is in the far-right, with Morris center-left and Reid center-right; this makes sense, as Kitamura's wide-ranging wordless vocalizations are a natural counterpart to Bynum's own adventurous explorations, as one can hear especially on "Stalactites Chapel," where long, sustained notes from Bynum and Kitamura are transfixing in setting the mood of the piece. But it's immediately apparent that Reid and Morris are hardly content to play supporting roles in this endeavor; they're just as likely to initiate melodic strands or rhythmic directions of their own, as on the album's opener, "Prelude to a Crazy Year," where Morris's dizzying runs merge with Reid's alternating arco and pizzicato phrases to give the record its initial burst of momentum.

There's a lot of energy and excitement on the record, but it's usually carefully contained, with the measured exchange at the outset of "It Is Deeper than Is Wide" exemplifying the quartet's deliberate communication. Bynum and Kitamura develop a spare motif using just a few repeated notes, while Reid joins in conversation with Morris to drive the piece forward, before Kitamura goes into a much more assertive staccato mode, setting a trajectory for the rest to follow with their own shards of notes. The record also makes plenty of room for each of the musicians' individual strengths to emerge: Bynum is in especially fine form, with movement from lyrical beauty to pure abstraction and noise (just listen to his menacing growls on "Glowworm" as evidence); but Morris is also characteristically exceptional, whether offering prickly fragments or his patented scrapes, as he's continually seeking ways to advance the dialogue. Reid's relentless imagination leads her from chamber-like passages to motion-filled ostinato phrases that always possess compelling rhythmic energy; and Kitamura will be a revelation to those who haven't yet encountered her unique brand of vocal improvisation, turning in an instant from subtle to spasmodic.

When the four hit their collective stride on the record's most potent track, "Then This Happened," the results are striking, with a piece that moves from a frantic intensity to a distilled calm, all in the span of just eight minutes of concentrated music-making.

Prelude to a Crazy Year; It Is Deeper than Is Wide; Cloud Ladders; Glowworm (Fungus Gnat); Then This Happened; The First Encounter; Stalactites Chapel.