By JOHN KELMAN
September 20, 2006
Sign in to view read count 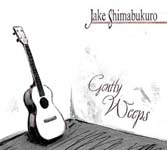 Pity the poor ukulele. Consigned to a less-than-respectable fate thanks to Tiny Tim and movies like Elvis Presley's Paradise, Hawaiian Style, this small four-string cousin to the guitar just can't get any respect. Jake Shimabukuro has been working hard to change that over the past few years on albums like Skyline (Epic, 2003) and Dragon (Hitchhike, 2005). But while earlier recordings have placed Shimabukuro's diminutive instrument in larger group settings, Gently Weeps is all the more remarkable for being a solo recording, representative of recent touring activity. Who would have thought a ukulele could sound so big?

Shimabukuro's earlier records also focus on his writing skills, but these twelve tracks are split evenly between his own compositions and covers of George Harrison's "While My Guitar Gently Weeps, Chick Corea's "Spain and Schubert's "Ave Maria. It's no surprise that Béla Fleck, who has literally reinvented his instrument in musical contexts that include jazz, classical and world music, is a big fan. Shimabukuro is clearly as stylistically broad as the intrepid banjoist. On "Ave Maria he trills the melody on the top string, supported by arpeggios on the other three, achieving a surprisingly full sound. His rubato take on "The Star-Spangled Banner is all the more remarkable for his ability to imply richer voicings than are actually possible with only four strings.

On "Spain he demonstrates the kind of dexterity and on-the-toes thinking that suggest the same kind of jazz chops that Fleck has brought to the banjo. "Misty begins with rapid strumming, but settles into a more relaxed vibe and even a hint of swing as he shifts tempo halfway through for a chordal solo that again demonstrates a surprisingly extensive language.

Shimabukuro's own tunes reflect similar breadth. "Wish on My Star is a delicate ballad, while "Let's Dance has a taste of flamenco. "Blue Roses Falling hints at Americana and even a touch of Ry Cooder, while Grandma's Groove proves you can indeed bend notes on a ukulele.

The forty-minute solo set is fleshed out with five bonus tracks, largely written for television and film, featuring Shimabukuro in group settings. Both "Angel and "Hula Girl could fit into a Ry Cooder soundtrack, the former a gentle ballad with a Tex-Mex vibe, the latter more propulsive and anthemic. "Beyond the Break rocks hard, with Shimabukuro's processed ukulele layered over a power trio of guitar, bass and drums.

Forget your preconceptions. Gently Weeps is a record that, if there's any justice, should do for the ukulele what Béla Fleck and the Flecktones (Warner Bros., 1990) did for the banjo.