By ELLIOTT SIMON
December 6, 2003
Sign in to view read count 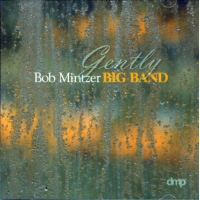 There are instances as a guy gets older when he thinks he is turning into his father. I had just such a moment as I began to listen to Gently from tenor saxophonist Bob Mintzer's Big Band. I saw myself as my father, listening to his mood music that came in large boxes from Reader's Digest every month. Whereas I used to make light of this particular aspect of his musical taste, as the classical sounding "Gently" with its soft tenor solo segued into the relaxing Brazilian samba "Timeless," I began to dig it. Yes, I had just had a long day at work and battled over an hour of traffic to get home. Apparently though, that is Mintzer's point. The world these days can be a harsh cacophony of sound and one of the best things that he can do is add a little subtlety.

Mintzer, who turned 50 this year, has released what is effectively a musical caress. Through his elegantly crafted arrangements and wonderful use of flutes and mutes, he has transformed his big band, which is capable of blowing the roof off any venue, into a 20-piece intimate but expansive combo. It includes self-penned pieces like "Original People," a broad sounding homage to Native Americans that features an upfront Mike Mossman trumpet solo along with classics like "Body and Soul" that is expertly navigated by Mintzer's tenor.

After hearing these, I breathed a sigh of relief. This was not my father's mood music. There was a tension to it, the musicianship was artistic, and the arrangements were original. Pianist Phil Markowitz, along with the crisp drumming of Peter Erskine and bassist Jay Anderson, helps anchors a tight rhythm section that gives the session its friendly feel. As the melodic Thad Jones tune "Don't Ever Leave Me," presented here with quiet single voiced orchestration, ended, I realized that Gently is mature music for the harried adult in each of us.