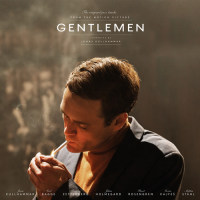 The twelve compositions recorded here are the motion picture soundtrack for Gentlemen, an adaptation of Klas Östergren's novel, directed by Mikael Marcimain. The film features the club scenes of 1960s and 70s in Stockholm, Copenhagen, and Paris, all within Kullhammar's wheelhouse.

The saxophonist's quartet of trusted bassist Torbjorn Zetterberg, pianist Carl Bagge, and Johan Holmegard (of Fire! Orchestra) opens the disc with the straight-up swinger "The Bear Quartet," Kullhammar's tenor chewing off pieces of Dexter Gordon and some Stanley Turrentine. He has the knack of capturing the jazz warmth that Alfred Lion pursued throughout his career. Switching to baritone on "So Long" summons Gil Mellé's sound, and "Henry" is bathed in early-Coltrane classic quartet.

The discovery here, though, begins with "Danish Blow," one of four tracks with Swedish saxophone legend Bernt Rosengren. A veteran of George Russell, Don Cherry, and Horace Parlan's bands, his saxophone was heard on the soundtrack to Roman Polanski's (now-cult) film Knife In The Water (1962). Kulhammar and Rosengren entwine their horns on the rich "Copenhagen," the gorgeous "Ballad For Bill," and a throwback piece that caters to the European taste for the hot jazz of New Orleans, "Henry City Stompers."

The album progresses in time and style as the tracks count up. Kulhammar blows two horns as a tribute to a nearly forgotten Blue Note artist on "Hommage to George Braith." Next, with the aid of Mattias Ståhl's vibraphone and Goran Kajfeš (Angles 9, Nacka Forum), the band shifts into mid-sixties Blue Note and the sounds of Bobby Hutcherson's Components (1965) on four tracks. Although the film may need an English translation, the music will not.