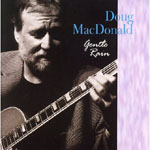 The long tradition of the mellow jazz guitar established by Barney Kessel, Johnny Smith, Herb Ellis, Billy Bauer, Jim Hall and others, and carried forward by Joe Pass, Wes Montgomery, Kenny Burrell, Ed Bickert, Howard Alden and their peers, remains in the capable hands of (relatively) younger players such as John Pizzarelli, Chris Flory and Joe Cohn. Doug MacDonald, now in his 50s, falls somewhere in between, having been on the scene for more than two decades while never forswearing his debt to Kessel, Smith, Hall and others who pointed the way.

Gentle Rain, MacDonald's ninth album as leader and third for Sea Breeze Records, finds him in a cozy, laid-back trio/quartet groove, able to give free rein to his creative juices while keeping his warm, seductive tone front and center. MacDonald's lithe, gently swinging approach is clear from the outset on "Miss Ann's Tempo (which, by the way, is about perfect), the first of eight tracks on which the full quartet performs. The pianist, as is the case on five other selections, is the remarkable Ross Tompkins. Marty Harris, no laggard himself, ably mans the keyboard on "Sweet and Lovely and "I'm Getting Sentimental. He's a tad more assertive than Tompkins, employing a heavier touch and sharper approach that give those tracks more of a stride/Oscar Peterson temperament.

On five numbers (MacDonald plays solo guitar on "Gentle Rain"), the leader is backed only by bassist Harvey Newmark and drummer Jack LeCompte, both new names to me but quite obviously talented musicians who make their presence known while deferring to MacDonald's primacy and ceding him ample space in which to roam. As for MacDonald, it's hard for me to measure him, comparatively speaking, as most guitarists from the "cool school sound wonderful (and nearly identical) to me. Suffice to say that he has chosen a number of alluring songs (it's a pleasure to hear "Idaho again, also "Symphony and "Baubles ) and approaches each of them with ardor and intelligence, as do his companions. As a bonus, he tosses in a snappy original, "Cry, on which the quartet (with Tompkins) excels.

While not everyone is enamored by the guitar, those who are should derive enormous pleasure from MacDonald's album, on which every component slides neatly into place and everyone does his part to maximize its congeniality and charm.