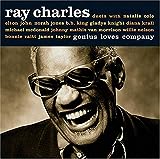 He was in his sunset.

Yellows, pinks, and oranges combined with the encroaching black of night to form a cool reminder of Ray Charles' smoldering day.

The Genius, as Charles was sometimes known, recorded his last album, Genius Loves Company, before succumbing to acute liver disease. The Concord Records release returns Charles to his musical roots of gospel, soul, blues and jazz while stripping away the calculated modern R&B veneer of his last few records. It's a fine swan song that is occasionally marred by its conceit.

Duets comprise the album. And some of them just don't work.

If Charles is the pie in the big band arrangement of James Taylor's "Sweet Potato Pie," then a befuddled Taylor must be a regular potato, because he's straight and bland. But that's better than Elton John and Michael McDonald. If their respective performances on "Sorry Seems to be the Hardest Word" and "Hey Girl" got poked with a fork, molten cheese would ooze out.

The majority of the album, however, ranges from pleasant to very good. The duet with Diana Krall on "You Don't Know Me" is fine, although it doesn't live up to the superior version on Modern Sounds in Country and Western Music that was a hit for Charles. Natalie Cole, Norah Jones, and Bonnie Raitt also provide solid, if unspectacular, turns.

The album starts to shine whenever Charles has a partner who can keep up with his unpredictable musicality. Gladys Knight on the gospel style "Heaven Help Us All" is scorching. The exacting restraint shown by Johnny Mathis on a lushly orchestrated "Over the Rainbow" meshes well with Charles' customary grittiness. Willie Nelson's storytelling doubles with the emoting Charles to effectively paint the epic "It Was A Good Year."

When Charles duets with B.B. King and Van Morrison, the results are spectacular. "Sinner's Prayer" features great vocal chemistry between Charles and King and a joyous instrumental joust between their respective piano and guitar. Billy Preston adds color to the tune by adlibbing on the Hammond B3. On the soulful "Crazy Love," Charles goes right after Morrison, who also wrote the song. Morrison is up to the challenge and he also spurs on Charles, his primary influence, with his own vocal prowess.

In the end, Genius Loves Company has done its job by placing Charles back into the public consciousness while rescuing him from his recent musical missteps. Unfortunately, too much filler has relegated the album to a modest place in Charles' jewel-filled discography.

Here We Go Again; Sweet Potato Pie; You Don't Know Me; Sorry Seems to be the Hardest Word; Fever; Do I Ever Cross Your Mind?; It Was a Very Good Year; Hey Girl; Sinner's Prayer; Heaven Help Us All; Somewhere Over the Rainbow; Crazy Love.