By JACK BOWERS
October 1, 1998
Sign in to view read count 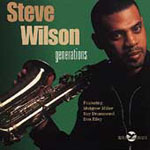 A glance at the personnel list confirms that Steve Wilson assembled a gold-standard rhythm section for his debut recording on Chick Corea's Stretch label. Miller, Drummond and Riley are about as seasoned as they come. Wilson himself is one of those enterprising and technically competent players with whom—for some murky reason—I am simply unable to connect on an emotional level, which is where one's response to music of any kind is usually sequestered. <> On the other hand, if someone were to ask me whether Wilson is a saxophonist worth hearing, I would say yes. He has the equipment—splendid chops, a pleasing tone, clear-eyed imagination—so why isn't that enough to earn my endorsement? Frankly, I don't know why. It's not that Wilson sounds too much like anyone else; he doesn't. And it's not that his improvisations (although often too generic) are less than appealing; they aren't. I can't explain my feelings, but should convey them to the reader so that he/she will know where I'm coming from.

Miller, Drummond and Riley praise Wilson highly, and that should count for more than a reviewer's opinion, anyway. As for what they produce as a unit, it's a well-constructed mainstream program consisting of five original compositions by Wilson, one each by Miller and Drummond, Billy Strayhorn's "Chelsea Bridge" and the standard "Sweet and Lovely." While accurately performed, the music seems to lack the kind of spark that one associates with musicians who are exerting themselves beyond normal capacity. In other words, everyone plays well within himself.

Miller is his usual two-fisted, aggressive self, Drummond keeps metronomic time, and Riley earnestly presses his colleagues forward. While I would give Wilson's soprano a slight edge over the alto, he's even more persuasive on flute (on his composition, "Wait"). It is on the whole an admirable session, and I wish I'd gotten more out of it. Others may, and I would applaud them for it.