By WILBUR MACKENZIE
February 8, 2010
Sign in to view read count 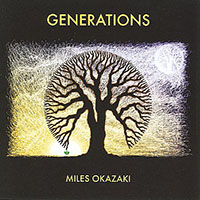 Generations, Miles Okazaki's second CD, displays the ornate structural latticework and solid foundation of a highly skilled conceptual architect. As a guitarist his tone is taut and balanced across the full range of the instrument, full of rhythmic and melodic nuance. Okazaki also shows thoughtfulness and creativity as a composer and bandleader, assembling a close-knit group of skilled colleagues and providing a conceptual and thematic framework that elicits exquisite contributions from all the players. This music resides at the crossroads of creative expression, rigorous concern for structure, profound expressions of individuality and highly effective group cooperation.

The record was recorded as one through-composed work, with each piece seamlessly integrated to the previous and succeeding section. "Overture" opens, built on an intricate rhythmic structure executed by Okazaki, vocalist Jen Shyu and drummer Dan Weiss. Throughout the record, the focus intermittently shifts back to the synergism between Okazaki and Weiss, as on the ending of "Magic" (which also features Shyu's incisive and lyrical vocals) and at the end of the record, where the reprisal of the "Overture" material precedes and punctuates "Moon."

The rhythmic intrigue of the opening segues into the prodigious flow of melodic invention in "Sun," setting up a wonderful solo by Okazaki. Other shining moments of instrumental lyricism and evocative depictions of abstract concepts emerge throughout the record. Saxophonists Miguel Zenon and Christof Knoche both take deeply moving solos, on "Waves" and "Ghost," respectively. "Fractal" features a thickly woven melody that hockets between the saxophones and voice, a structural device also used effectively in "Ghost." Bassist Thomas Morgan's unaccompanied solo at the end of the title track shows a compelling balance of economy, skill and depth.

Okazaki's deft arranging and inventive melodic sense are central to the music's identity, providing context and form through which the improvisers navigate their own personal expressions.