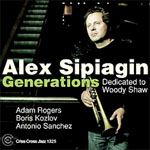 Woody Shaw was highly regarded as one of the finest trumpeters and composers of his era at the time of his tragic death in 1989, at the age of 44. Alex Sipiagin, an exciting young trumpeter, pays an eloquent tribute to Shaw with Generations, a blend of a few Shaw compositions with some of his own writing.

From his first original tune, "Greenwood I," Sipiagin's skill and intelligence are evident. Sipiagin works the melody like a surgeon, to build articulate solos with flurries of notes that cascade without colliding. Guitarist Adam Rogers is Sipiagin's stylistic twin; he also deliberately constructs dynamic riffs made of thought-quick, octave-rich interior dialogues. Sipiagin and Rogers are also great on "Windy Bahn," although they take a back seat to bassist Boris Kozlov, who plays an excellent pizzicato. Sipiagin switches to flugelhorn on "Chance" and plays with no loss in facility or fire.

The quartet might be even more impressive on the Shaw tunes. Sipiagin ups the ante on "Cassandranite," switching up the tempo in mid-song with neither he nor the band stumbling over its own fingers. Sipiagin, Rogers and Kozlov all shine on "Beyond All Limits," while the band expertly navigates the tricky changes of the light-footed "Katrina Ballerina" and Sipiagin simply blows his heart out on the wonderful "Blues for Wood."

Sipiagin is an excellent trumpeter. He thrives in the middle register but excels in any range, blowing with strength and clarity. Rogers plays the guitar with fingers as light and quick as a pickpocket. Add the fine, even-handed drumming of Antonio Sanchez and Kozlov's bass and the result is a perfectly balanced quartet. After hearing Generations, Woody Shaw would've been proud—or possibly envious.