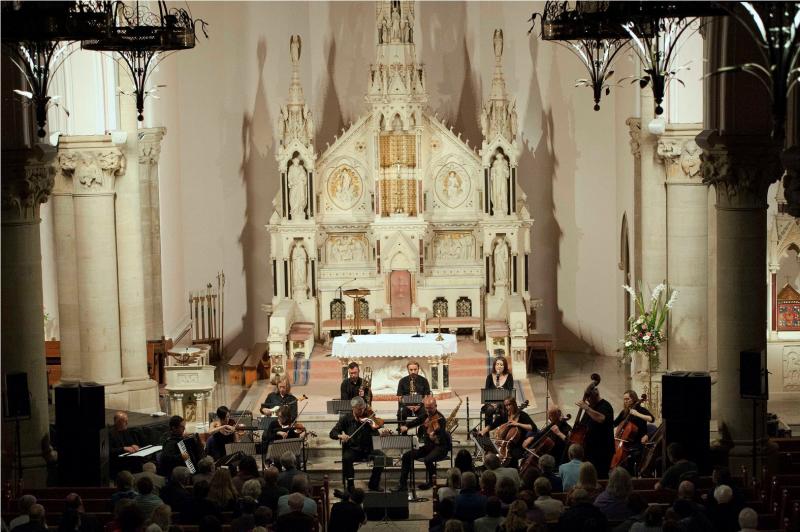 That an anonymous homeless man, singing quietly to himself on a London street in 1971, should inspire a standing ovation and a well of emotions among the audience in St. Michael's Church forty three years later says much for the power of art to alter the way we view the world.

Bassist/composer Bryars was briefly part of the 1960s British free-jazz/improvisation scene in the Sheffield-based trio Joseph Holbrooke, alongside guitarist Derek Bailey and drummer Tony Oxley. When the trio split up in 1966 Bryars packed his bass away for the next seventeen years, during which time he dedicated himself entirely to composition in a remarkably wide variety of settings.

In a long career, Bryars has composed and arranged operas, cello concertos, film music, percussion ensembles, choral, experimental and minimalist music. He's also composed for choreographers, notably Merce Cunningham. Yet despite the volume and quality of his work Bryars best-known composition arguably remains "Jesus' Blood Never Failed Me Yet." In part, this may be due to its immediate success and its longevity, but more likely—as those in attendance at St Michael's Church could attest—it's simply due to the uniquely moving quality of the music.

In 1971 Bryars was working on a film about homelessness around the Elephant & Castle and Waterloo areas of London. The recording of an old homeless man singing a hymnal piece never made the film but it sparked Bryars imagination. He put the briefly-sung stanza on a loop and added orchestral accompaniment. The first performance came at the Queen Elizabeth Hall in 1972 and over forty years later the music was haunting the audience at the Happy Days Enniskillen International Beckett Festival

As festival Composer in Residence, Bryars' performance of "Jesus' Blood Never Failed Me Yet"—accompanied by fourteen musicians—was his first of several concerts celebrating Beckett. The beauty of Bryars orchestral arrangement, enveloping the old man's taped voice, buoying and framing it, echoed the life-affirming humanity that is a central part of Beckett's work.

The voice, fragile yet full of conviction started the piece:

For thirty three minutes the vocal and orchestral mantra washed over the audience and induced meditative repose. With the exception of Bryars' plucked acoustic bass it was difficult to discern individual instruments as the sound of one instrument bled into the next. Notions of time slipped away.

Towards the end of the performance the old man's voice was joined by another, more familiar pre-recorded one—that of Tom Waits. In 1993, Waits collaborated with Bryars on a new recording of "Jesus' Blood Never Failed Me Yet," which was released on Point Records. Waits, so often typecast in films as a hobo/vagabond character, effectively sang a duet with the old man in a brief segment that was both tender and emotionally powerful.

The ensemble voice dissolved little by little and the old man's voice faded out, leaving just strings for the final stretch. After a poignant period of silence, punctuated only by the creaking of the church pews, a standing ovation ensued.

Long after the music had ended its ripple effects were seen in the animated conversation that took place among attendees. Happy Days festival volunteers, in bowler-hatted homage to Beckett's Vladimir and Estragon, handed out glasses of red wine in a fitting sort of communion.

The vagabond-type characters Vladimir and Estragon in Beckett's Waiting for Godot exist between faith and despair in a seemingly futile cycle; likewise in Bryars' composition, the fragility of the old, homeless man's voice evoked pity, and yet there was something uplifting and ultimately universal in the faith of his repeated song. As Vladimir says in Act II of Beckett's famous play: "To all mankind they were addressed, those cries for help still ringing in our ears! But at this place, at this moment of time, all mankind is us, whether we like it or not."