By BRUCE LINDSAY
March 7, 2011
Sign in to view read count 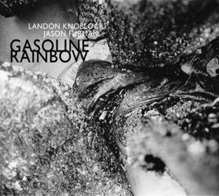 Pianist Landon Knoblock and drummer Jason Furman share a decade-long history of function bands; playing church meetings, weddings and corporate events across Florida before relocating to New York State. They also share a love of improvised music and experience with a wide-ranging collection of musicians including Michael Blake, Kevin Mahogany, Rosemary Clooney, and the Four Tops. Gasoline Rainbow is their second duo album of improvisations, following the self-produced "Uncarved Block" (2007). It may lack the immediate familiarity of a typical Top 40 set, but that's no bad thing.

The music on Gasoline Rainbow clearly comes from a duo with a close understanding of each other's playing styles and musical imaginations. The improvisations are full of ideas, flowing, never hesitant and often characterized by humor as well as by precision.

This is a musically democratic duo: Furman is just as likely to lead the way with his drums as Knoblock is with his piano. Indeed, in terms of the actual sound, it's Furman's drums that tend to predominate—powerful, incendiary, cascades of notes rip out from his kit on numerous occasions. Knoblock is a more considered player, fond of leaving spaces between his notes, more reflective. Of course, there are occasions when the opposite holds true—Furman is capable of restraint when the music calls for it, Knoblock can crank up the tempo and scatter his own flurries of notes when the need arises.

Knoblock and Furman do a nice line in titles too. "Decoy Trout" neatly sums up the racy, darting, slightly panic stricken rhythms on that tune. The title of "Snowball Earth" reflects the wintry, meditative atmosphere of this lengthy piece which features some exquisite drum patterns from Furman and some delicately spacious piano from Knoblock. "Tasty After Dinner Jazz Mint" is more misleading: rather than the smooth, relaxing sophistication that's offered by such a post-prandial treat the tune delivers a more combative experience, with Furman at his most hard-hitting and Knoblock working frantically in his instrument's lower register.

Whether the tunes or the titles come first isn't clear—there's no rule that says improvisations can't start with a title—but it's good to see musicians who recognize the fun to be had matching the two. It's good, too, to hear musicians who are having fun with musical invention. Gasoline Rainbow is unpredictable, energetic, beautiful, loud, soft, subtle and surprising.