Gary Thomas: Till We Have Faces 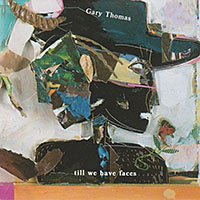 Gary Thomas
Till We Have Faces
JMT
1992

It was sometime in 1992 when I came across today's Rediscovery. I was walking by a record store (remember those?) in my hometown of Ottawa, Canada when I suddenly heard this staggering guitarist playing over what sounded like a standard I thought I knew but couldn't place. His tone was gritty, but his lines sounded familiar as he ran incendiary line after incendiary line, supported by an equally fiery drummer and a bassist who was truly swinging mightily. I ran inside the store to find out who this guy was, only to learn that I was listening to an album not by the guitarist but by a saxophonist I'd known from drummer Jack DeJohnette's Special Edition group on 1987's Irresistible Forces and even better Audio- Visualscapes from the following year, both on Impulse! Records: saxophonist/flautist Gary Thomas. The album was Till We Have Faces, originally released that year on JMT and later reissued by Winter & Winter.

The guitarist? Well, listening to more of the album after seeing the cover in the "Now Playing" box on the cash counter, it became clear that I was listening to one of my favorites, Pat Metheny. But, barring his own extraordinary collaboration with free jazz progenitor Ornette Coleman, Song X (Geffen, 1985, reissued in expanded, remixed and remastered form by Nonesuch, 2005), I'd never heard him play like this—and even then, it was significantly different because of the demands of Coleman's music...and his own. And while his tone was not unlike that used on Pat Metheny Group pianist Lyle Mays' album-atypical "Are We There Yet?," from the band's Letter From Home (Geffen, 1989)—a new texture for the guitarist: tart, angular and overdriven—I repeat: I'd never heard him like this before...aggressive and as far from polite as he'd ever been.

Metheny was, of course, no stranger to jazz standards or the Great American Songbook, having dabbled with them occasionally on his own records including 1985's trio date with Charlie Haden and Billy Higgins, Rejoicing (ECM) and his 1989 set with Dave Holland and Roy Haynes, Question and Answer (Geffen), where he mixed original music with well-known material from Horace Silver, Miles Davis, Jerome Kern and Oscar Hammerstein...and, of course, plenty of Coleman.

But he'd never done an album of all-standards. Till We Have Faces wasn't Thomas' first record of all-standards either; that would be 1990's While the Gate is Open, also on JMT and reissued on Winter & Winter in 2003. But, if it was anything, it was a spit in the face to the 1980s neocons, who'd set the progression of jazz back significantly by reasserting the tradition as the only real jazz.

I'd not heard While the Gate is Open (still haven't...something I plan to rectify real soon)—nor, in fact, had I heard any of Thomas' solo albums at the time, but while the anti-neocon in me (since mellowed) rankled at the idea of any all-standards records, Till We Have Faces was a refreshing reminder that it wasn't the material that was dated, it was the work of those who felt that the only way to play it was in a completely reverent, respectful fashion.

Of course, Keith Jarrett had already well-established his standards trio by then, having released a slew of records following his first two from 1983, collected in ECM's Old & New Masters Edition box, Setting Standards: New York Sessions (2008). But even Jarrett's stream of-consciousness approach to reinterpreting well-worn material in new ways with Gary Peacock and Jack DeJohnette seemed somehow more polite...a word you'd be hard-pressed to apply to Till We Have Faces—even on the Latinesque reading of Horace Silver's "Peace," where Thomas' mellifluous flute is contrasted by Metheny's gritty tone.

Beyond Thomas and Metheny, much of this has to do with the rhythm section. Drummer Terri Lyne Carrington—heir apparent to Tony Williams if ever there was one—had already begun to garner attention for her work on albums by Robin Eubanks, Thomas' Special Edition frontline mate Greg Osby, John Scofield and Wayne Shorter, for her ability to match intuitive firepower with anyone while, at the same time being capable of elegance and delicacy, should the need arise.

Here, with bass duties split between Anthony Cox—Thomas' general bassist of choice on his JMT dates up to this point—and, for Thomas, newcomer Ed Howard, the rhythm section swings its collective ass off, firing on all cylinders on tracks like the album-opener "Angel Eyes," which begins with a nuclear, bar-setting tenor/drums duo. They also move empathically with the group dynamic on the closing "You Don't Know What Love Is," a fiery-cum-graceful closer where the classic standard is taken places it's never been while never losing sight of its melodic heart. Metheny's horn-like guitar synth is featured here, and while it has occasionally overstayed its welcome on some of his own records (a situation since resolved with more judicious use, given the increasingly broad palette with which the guitarist now works), here it matches the fire of Thomas' gritty, unfettered tenor perfectly—and when Metheny introduces his own color underneath Thomas' solo as a means of setting up his own, it's absolutely exhilarating.

But with the exception of Billy Strayhorn's "Lush Life"—a positively gorgeous duo feature for Thomas and Metheny, the guitarist forgoing his electric for a, well, lush six-string acoustic—the guitarist largely opts for a more hard- edged tone and some of the most energetic, reckless playing of his career. Perhaps the only other time Metheny's come close is on saxophonist, Kenny Garrett's Pursuance: The Music of John Coltrane (Warner Bros., 1996), though there he adopts a more characteristically warm hollow-body tone for most of the session.

The odd man out here is pianist Tim Murphy, already known to Thomas fans for his piano and synth work on previous JMT dates, but who has since become better known as an educator. Why that is? We'll never know, but it's certainly not because he fits the adage of "them's that can do; them's that can't teach"; his solos may be relatively rare compared to the time given to Thomas and Metheny, but when he does get the occasional feature, he demonstrates a firm touch and confident approach, and his accompaniment is perfect: angular when necessary, melodic when required.

Meanwhile, Thomas trumps most "all-standards" records with Till We Have Faces—an album that was critically well-received but has since largely fallen through the cracks. Time, then, to pull this one out and Rediscover a musician who has been notably absent in recent years (he's now Professor of Jazz Studies at Baltimore's Peabody Institute) and Till We Have Faces: one of the best standards records of the past quarter century, with some of Metheny's most aggressive playing ever and the album that should have made Thomas a star.