Gary Smulyan with Dominic Chianese at Jazz At Kitano 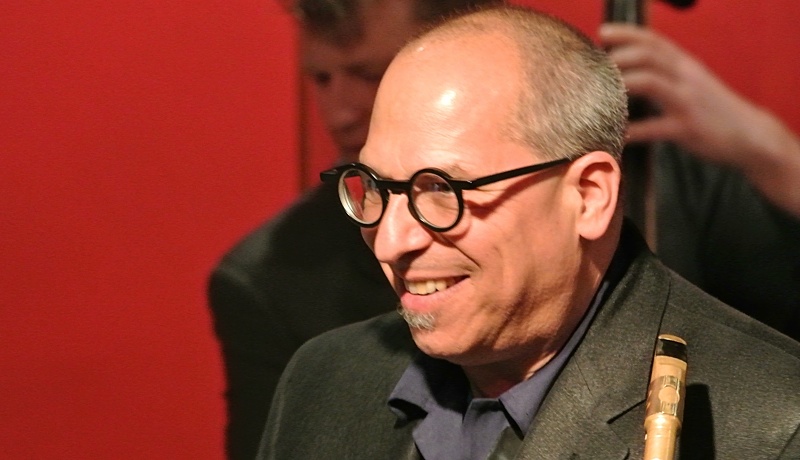 Shortly before this show began, on a beautiful Saturday evening that truly marked the start of spring, a small crew of musicians and concert-goers, including this writer, were seated around the bar at Jazz At Kitano. The mood in the room was one of relaxation, with a low hum of conversation and laughter hanging in the air. The intelligently irrepressible Matt Wilson, who took to the drums once the show began, was playing ringleader for an impromptu game where participants try to come up with three musicians that would make for an incongruous and intriguing trio. Everybody involved in the exercise was aware that none of the players who came to mind would probably ever join forces, but nobody can really be certain of anything these days. The audience was, after all, there to hear the unlikely-and-charming combination of baritone saxophonist Gary Smulyan and vocalist Dominic Chianese.

Gary Smulyan, the long-reigning baron of the bari, was already known for trying different things before this partnership came to pass. Projects like Gary Smulyan With Strings (Criss Cross, 1997) and the organ-centric Smul's Paradise (Capri Records, 2012) stand tall in his discography, marking him as one who always looks for a different angle with each release, but both of those projects are variations on oft-explored themes. Bella Napoli (Capri Records, 2013), on the other hand, is not. Plenty of saxophonists have done a horn-plus-strings date or worked with an organ combo, but how many have married jazz tradition to Canzone Napoletana? It's doubtful that anybody did it before Smulyan.

Smulyan and Chianese, the actor-cum-singer best known as "Uncle Junior" on HBO's The Sopranos, took to this Park Avenue spot for two nights to celebrate the release of the aforementioned collection of jazz-tweaked Italian tunes artfully arranged by Jeff Lederer. The first set on the second night of this stand found this group charting a course through more than half of the songs on the album. These shows marked the first live performances of this material, but hopefully not the last.

The first set took off with the album-opening instrumental take on "Funiculi Funicula." Pianist Gary Versace delivered the most engaging solo here, creating cascading runs that gave way to choppier thoughts when the groove shifted from swing to Latin. Chianese made his first appearance of the night on "Anema E Core," the first of several love songs that he sang. Versace, now on accordion, and Joseph Brent, with mandolin in hand, provided the stamp of Italian authenticity that the music needed here and elsewhere. "Dicitencello Vuie!," which also featured Chianese, started off in haunting fashion with Martin Wind's arco bass work and Versace's accordion setting the stage. As the song progressed, Wilson's spang-a-lang stick work stoked the flames within Smulyan; the saxophonist caught fire in a big way during this particular solo spot.

Chianese departed the stage when it was tarantella time, leaving Smulyan and company to deliver the up-tempo, raucous-and-spirited "O Saracino." Smulyan's sprints got a great reaction, Wilson's melodic tom exploits were a treat to behold, and Versace covered the whole baroque-to-bop spectrum when it was his turn to shine. Chianese returned for a trip through "O Sole Mio," which had a gentle bounce thanks to Wilson's Vernel Fournier-esque groove, but he departed when Lederer grabbed his clarinet to join in on the odd-metered "Tre Veglia E Sonno." Lederer spent part of the evening providing subtle cues and conducting, serving as the connective tissue between the band and Chianese, but he made the most of his lone instrumental appearance during this zany, bleary-eyed mazurka. His reconstructive antics had him playing sans clarinet bell at one point, and then he upped the ante by removing the upper joint of his clarinet and attaching the mouthpiece to the lower joint.

The final performance of the set—the Cuban-inflected "Marechiare"—brought Chianese back to the stage, and it brought his voice into close contact with Smulyan's burly horn. These two men certainly make for an odd pair, but it's important to make the distinction between odd and incompatible; they absolutely do not mean the same thing. Smulyan and Chianese clearly figured out a way to marry their respective talents, creating something special in the process. That much was obvious during this particular performance.