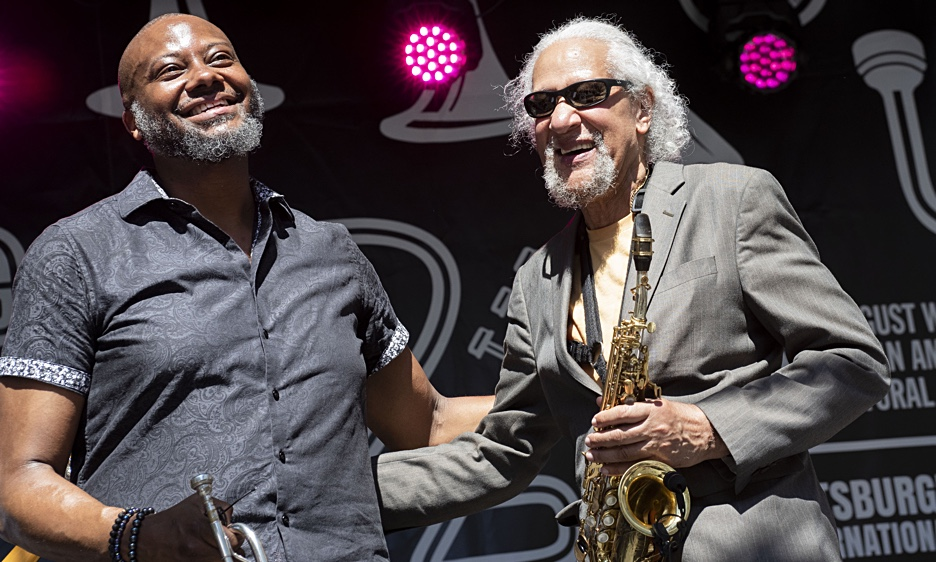 The 2019 Pittsburgh International Jazz Festival featured a heavyweight lineup of world-renowned saxophone players, including Charles Lloyd, Nubya Garcia, and Gary Bartz. Bartz was scheduled to perform selections from Bitches Brew and In a Silent Way on Sunday June 23 alongside Sean Jones on trumpet, Orrin Evans on acoustic piano and Fender Rhodes, Walter Barnes on bass, and Pittsburgh's own John Shannon on guitar, and James Johnson III on drums.

The most striking thing about Bartz is not his sober attentiveness nor his piercing gray eyes—it is the magnitude of his legendary spirituality. This is evident to those who personally interact with the him, including Sean Jones, who conducted an artist interview with the Miles Davis alum at the August Wilson Center prior to Bartz's soundcheck. A lifetime of activism, travel, adversity, and triumph has not undermined Bartz's inner calm; his spirit remains as free and as steadfast as the widest of rivers. "I study Buddhism," he explained as he sat across from Sean Jones, fingertips pressed together gently in his lap. "I read a lot of Thich Nhat Hanh and he often talks about this idea of loving kindness. That's the story behind 'The Song of Loving Kindness.'"

Bartz grew up on the famed Pennsylvania Avenue, located in west Baltimore. With historic connections to Max Roach, Count Basie, and near a hefty amalgam of notable touring artists, Pennsylvania Avenue was nationally renowned as an epicenter of jazz culture. Bartz lived at the top of Pennsylvania Avenue and would walk down the sloped street on the weekends, passing the Royal Theater, the comedy club, and the musician's union building along the way.

In the summertime, a teenage Bartz and his father would pack in the family car to make the drive down to the Royal Theater. When Bartz was fourteen years old, Sonny Stitt was playing a matinee run. He and his father made the familiar drive down the hill to catch the show. Several sets passed before Stitt leaned towards his microphone and said, "I am told we have a young man with us tonight who would like to play." The teenage Bartz looked around expectantly for several seconds before realizing that the elder saxophonist had been referring to him. "What I didn't see," Bartz recalled, "was that my father had stowed my saxophone in the back of the family car before we left! Sonny was tough love." Before the year's end, Bartz crossed paths with John Coltrane and Benny Golson at a regular Wagon Wheel Club jam session. "They were working there with Earl Bostic. I didn't know who they were. Years later, Benny told me, 'we remembered you. We went back to New York and we were raving about this little kid from Baltimore.' Trane knew me before I knew him—that's some joke!"

Bartz currently teaches at Oberlin College of Music in Ohio. "I went into it kicking and screaming," he recalled. "My parents said, 'you need something to fall back on.' But teaching is learning and vice versa. Because they start off reading music, students don't know how to hear it. That's a disadvantage. When I point out 'you can't hear,' they understand. I've just tried to make it easier to hear things."

As an educator at Oberlin, Bartz is considered something of a neighbor to Pittsburgh. His Pittsburgh Jazz Festival performance was part of a modern tradition of exchange and crossover between the Pennsylvania and Ohio scenes. But long before players like Sean Jones began making the cross-state runs to the Steel City, Bartz made the special point to bring a touring group to Pittsburgh's legendary Hill District in the 1960s. It was the first time that the young Bartz had taken a group on the road. When he played at the Crawford Grill, arguably Pittsburgh's most important jazz club, he was accompanied by Jeff Jefferson on bass, Arthur Stanley Trotman on drums, Grachan Moncur on trombone, and a New York-based pianist known affectionately as "Hip."

In the post-Cannonball era, Bartz worked as the first alto player of prominence in Davis's band in more than a year. Davis, who was notoriously hands-on in those days, often invited players to recording sessions over the phone. "My friends and I would call one another all the time pretending to be Miles," said Bartz. "Then one day I got a call and the voice on the other end said, 'this is Miles.' I said, 'very funny' and he just kept saying, 'this is Miles.' He started getting annoyed and then I finally realized who I was talking to." Bartz contributed to Davis's Live-Evil and a number of shows that would go on to yield a number of bootleg recordings, including The Cellar Door Sessions, Bitches Brew Live, and Miles Davis at Newport 1955-1975 Vol. 4.

The tour with Miles was an extended festival of firsts for the reedman. "I'd never worked with sound guys before. It was a totally new experience for me. We were sound-checking and I had a hard time hearing the trumpet so I leaned over and said, 'Miles, I can't hear you!' He looked at me and said, 'well, what are you telling me for?'" Bartz joined Davis, Keith Jarrett, Michael Henderson, Don Alias, James Mtume, and Leon "Ndugu" Chancler in 1971 when the group made an attempt to lift up the Iron Curtain in Belgrade. In the era of détente, the Eastern bloc had yet to receive certain western products, including American records. When the group took to the stage with a repertoire bursting selections from Live-Evil, Bitches Brew, Jack Johnson, and Get Up with It, the audience reacted with confusion. "We played and they booed and they hissed!" laughed Bartz, "—and then weeks ago on YouTube, they put out that concert, boos and all!"

When Bartz stepped on the Liberty Avenue Stage later that afternoon, the audience received his performance with enthusiasm. Jones, who had been delving more deeply into the world of effects since finishing his commissioned project "Suite for Flying Girls," was armed with a formidable arsenal of pedals. Evans sat between the piano and the Rhodes, preparing himself to mysteriously navigate a set comprised of selections from Bitches Brew and In a Silent Way.

With subdued regality, Bartz singlehandedly resurrected the spirit of Live-Evil, bolstered by Jones's whispered notes. Evans conjured satanic hums from the deepest recesses of the Fender Rhodes while Johnson entrenched himself, working as a one-man foundation for the form. Throughout the set, he played with flexibility, yielding to the ebbs and flows of the musicians around him while steadying the ensemble. Shannon layered electronic murmurs behind Jones while Evans sat regally behind his acoustic piano and Fender Rhodes, swinging between the two with unsettling ease.

Bartz and Jones both speak about musical construction in terms of tension and release, but that precise instant of tension and release had a physical element attached to it. Shannon, Evans, Johnson, and Barnes erupted behind the horn players and the crowd of thousands collectively released a long-held breath. Bartz and Jones squared up, facing one another at center stage; they leaned so closely that their foreheads almost touched.

The musicians began to drop out and Jones's characteristic tone pierced the thick downtown air as he played the head of "My Funny Valentine." His mournful sound swept over an uncharacteristically silent crowd as a breeze rolled through. It was a haunting moment, punctuated by Shannon's subtle dusting of light effects. Jones and Shannon were joined by Evans on the Rhodes with Johnson ushering in "Sanctuary."

When the tension reached a zenith, the musicians began to drop out one-by-one, leaving Bartz standing at the lip of the stage. As his solo sound echoed off of the building faces, he reminded everyone in Pittsburgh that he was, and has always been, the architect—a man who transcends genre by simply being. "Some music just comes through you," he admitted earlier that day. "Sometimes I just play and it comes through me."