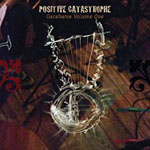 There has always been a strong case to tear down the walls that divide music in the past two hundred years—especially in the 21st century. The best case for this phenomenon has always come from forward-thinking musicians themselves. One of the best examples of this comes in the form of Positive Catastrophe, a little big band co-led by cornetist/flugelhornist Taylor Ho Bynum and percussionist/vocalist Abraham Gomez-Delgado on the appropriately titled debut, Garabatos Volume One.

The record appears to be a series of loosely connected pieces—sketches or doodles, as the word "garabatos" suggests. The music is mostly tonal in nature and, because of its rather short length, might easily be categorized as incidental. "Travels Parts 1 & 2" and "Travels Parts 3 & 4" break the mold, and Jen Shyu stream of consciousness vocals skitter and glide across the melody very beautifully as the music courses with Charles Mingus-like bravado. The contrapuntal horns add especially memorable tone and color.

Although this is a deliberate ensemble effort, some soloists do give spectacular accounts of themselves. Jen Shyu may play the stringed "erhu," but when she vocalizes it is as if she were singing with the bell-like clarity of a burnished trumpet. Reut Regev brings folksy growls and smears to the set with her singular voice on the trombone, especially on "Contenido Adentro." Her words and singing on "Stillness/Life" are positively seductive—as alluring, in fact, as the ballad is enduring. Michael Attias gritty baritone voice is always in commanding character throughout. He is the pulse of "Metro Mono," but he does catch a bit of doodle-room every once in awhile, stretching in a grand manner on "Stillness/Life."

Bynum and Gomez-Delgado are credited with much of the record's compositional duties, including the lyrics on most of the vocal tracks. Neither musician solos much, though Bynum does have a fabulous break on "Revamped," as does Gomez-Delgado on "Travels Parts 3 & 4," but then this polyphonic music is written to showcase the ensemble rather than spotlight individual voices. A myriad of shades and colors results, making the musical experience all the more enticing.

Positive Catastrophe is by no means the first band to create what may well come to be this polyglot/Esperanto idiom of music. Some of the comparatively shorter work composed by Mingus in the very early fifties was similarly ahead of its time, and his Epitaph (Sony, 1990) will forever remain one of the foremost genre-defying, symphonic heraldic works of this contemporary era in music. However, much praise is due to Positive Catastrophe for pulling off Garabatos Volume One, which will remain in the memory for some time to come, and for all the right reasons.