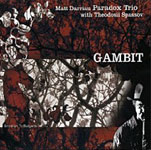 Among multi-reedist Matt Darriau's many projects and collaborations his Paradox Trio stands out as a forum for his own creativity. Darriau is an alto man and clarinetist who has also mastered several Eastern European instruments such as the gaida (bagpipe) and Bulgarian wood flute or kaval. On this offering, he and his band are joined by kaval master Theodosii Spassov for a thrilling session that features instrumental virtuosity combined with rhythmic intensity.

Electric guitarist Brad Shepik, five-string cellist Rufus Cappadocia and the phenomenal Seido Salifoski on dumbek and percussion form a fierce rhythm section. Spassov and Darriau are nothing short of brilliant together on tunes that allow them to dig in as part of the furious pace or soar above the fray. Spassov makes his simple wooden tube come alive, breathing fire on CD opener "Theo's Gambit." He then melds elegantly with Darriau's alto on the gorgeously emotive "Maichinko," Cappadocia picking up his bow to showcase his instrument's uniquely beautiful sonority.

Darriau breaks out his gaida and pairs with kaval for a Celtic-esque foray entitled "Paidushko" while "Point" is a beautifully contemplative exploration that extends space and stops time. Closer "Tudorka," a Spassov original, serves as a final meditation and fitting emotional release. Three other tunes include only the four-member trio, sans Spassov: "Faux 7," a snaky clarinet-led teaser, the bagpipe chant "Free Gaida" and a superb world-jazz mover and shaker "Cocek I Gong" showcasing Shepik and Darriau. Darriau's gambit pays off handsomely, bringing his smorgasbord of worldly chops to bear within this already eclectic mixture, producing an entrancing worldly delight.