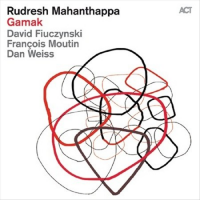 Did saxophonist John Coltrane have any idea of the consequence of dipping his toes into the music of India in the 1960s? Not only did he introduce jazz to new harmonic structures, but he marshaled the forces of jazz, perhaps, to ingurgitate world music. While the repercussions of Coltrane's spiritual journey are still being felt, what of the ricochet from Indian culture?

The saxophonist (a second-generation Indian-American) speaks a form of pidgin Indo-jazz that is derived from a need to communicate across two cultures by finding a common language. Unlike Coltrane, Mahanthappa's Brooklyn/Indian accent heard on Gamak is spiced with prog-rock jazz and a post-M-BASE sound.

ADVERTISEMENT
From the opening funk-filled fest of "Waiting" a the hardcore finale, "Majesty of the Blues," the quartet crackles with energy and motion. Weiss' drumming neatly transforms itself from ragas to boogaloos. Fiuczynski also adopts a sitar-like sound on "Abhogi." Switching between a Chennai sound and a Delta blues. Mahanthappa's concept is more an amalgamation of culture and sound, than it is fusion. Where fusion implies a diluted approach, the music here is concentrated, and somehow unmitigated.

The sweat poured into tracks like "Wrathful Wisdom" and the amphetamine-drenched "Copernicus -19" are bookended by the pacific "Ballad For Troubled Times," the bass driven "F," and the inspired piece of introspection, "Are There Clouds In India?"

The butterfly effect of Coltrane's 1960s quest has produced reverberations back to America's shores—or maybe the world-birthing "Om" is finally being heard as an echo.

Abhogi; Stay I; More; Are There Clouds in India?; Lots Of Interest; F; Copernicus -19; Wrathful Wisdom; Ballad For Troubled Times; Majesty of the Blues.