By KARL ACKERMANN
June 5, 2015
Sign in to view read count 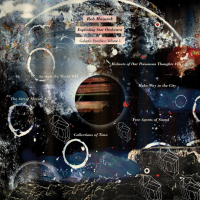 In the past twelve-month period, composer, electronic artist and cornet virtuoso Rob Mazurek has lead on a half-dozen or so different releases. For the most part, each has featured different line ups and formations from solo efforts to large ensembles and each has garnered enough superlatives to tax the thesaurus. And yet again, Mazurek has raised the bar with his most impressive, far reaching and unique collection with the astounding Galactic Parables: Volume 1. Backed by the revolving cohort that is the Exploding Star Orchestra, this commissioned suite expands on the concepts that Mazurek began shaping with Matter Anti-Matter: Sixty Three Moons of Jupiter (Rougeart, 2013)

Released on the heels of an adrenalin-packed 2015 US tour with his São Paulo Underground and Black Cube SP, Galactic Parables: Volume 1 documents live performances at Sardinia's Sant'Anna Arresi Jazz Festival and a later performance at the Chicago Cultural Center, both from 2013. Inspired in part by the music and overarching themes of Sun Ra and linked to AACM history in Mazurek's hometown of Chicago, the artist has long painted on a broader canvas, geographically, energetically and spiritually. This double-disc collection (and three LPs in the vinyl version) continues Mazurek's exploration of dimensions and concepts that defy boundaries and definitions.

The two live performances presents unique variations of the same five compositions, with "Helmets in Our Poisonous Thoughts #16 / Awaken the World #41" performed as a medley on the Italian disc but broken out at the Chicago performance. Damon Locks provides the text and interpretation of allegories on the spirit world and slavery, bookending Mazurek's compositions and adding occasional excerpts of Sun Ra's own verbal expressions. The first disc opens with the twenty-plus minute "Free Agents of Sound" where Locks' recitation builds in intensity then gives way to Mazurek's elegiac cornet, opening the door to the larger group. Guitarist Jeff Parker and pianist Angelica Sanchez have stirring solo moments followed by a swirl of instruments and some forceful performances from drummer John Herndon and saxophonist Matthew Bauder.

Without pause, Locks' narrative moves onto "Make Way to the City / The Arc of Slavery #72 (Part 1)," his voice electronically manipulated and finally breaking up like an errant satellite transmission. Another very lyrical solo from Sanchez guides the piece as she transitions to something much more resembling a Cecil Taylor abstraction. Mazurek's cornet growls its introduction but his playing overall is some of his best; pure and piercing tones, with less electronic deployment than on some of his recent work. "The Arc of Slavery #72 (Part 2)" begins like an airborne waltz with a steadiness that underlies the building conflagration. After a particularly stirring reading, the larger ensemble swells to an emotional pitch on "Helmets in Our Poisonous Thoughts #16 / Awaken the World #41" followed by the exotic, electronic Nuevo-calypso of "Collections of Time" which closes the first disc with some beautiful and soulful cornet.

Galactic Parables: Volume 1 surpasses anything Mazurek has done to date. Pulsing brushes with disarray, intense and stimulating improvisations and gorgeous melodies are combined, broken apart and—in the end—translated to beautifully extended movements. Mazurek and company play in the moment whether in unhurried, probing passages or in unstructured expeditions into alien territory. This is riveting and spontaneous art, restless, moving and rewarding beyond expectation. It offers abundant satisfaction to anyone disposed to accept it on its own standing.