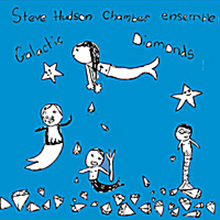 Some people favor the big statement: the bling of an over-large jewel, the blinding distraction of too many sparkly things. Others have the good taste to know that the small stones shine most brightly. Pianist, composer and melodica player Steve Hudson is one of those people, and the debut recording from his Steve Hudson Chamber Ensemble, Galactic Diamonds, is a collection of little gems.

The idea of a Chamber Ensemble might suggest a classical aggregation; as does the presence of Jody Redhage's cello and Zach Brock's violin. But Martin Urbach's percussion takes the group in a more jazz- and funk-oriented direction while Hudson's use of the melodica gives "Para" more than a hint of a Parisian street scene.

Above all, it's the ensemble's willingness to draw so many different styles of music into its repertoire that makes it stand out. "Galactic Diamonds" is the closest the album gets to a straight-ahead jazz number. "Tune With Tango" is pretty much what it says, but this is a jagged, slightly threatening, tango with a sense of pent-up emotions just below the surface. Redhage's wordless vocal adds an air of mystery to "PG" and "Galactic Diamonds." "Funky Hobbit" begins with a funky but simple groove from Hudson's electric keyboard and Brock's violin, but this introduction is deceptive for it soon shifts shape, breaking down into some free jazz improvisation before returning to the opening groove as the tune ends. "Wanderin'" is a delightful contrast, evoking an evening's parlor entertainment with its gently lilting melody from Brock and Hudson's sympathetic piano accompaniment. "Keep It Simple" is a gorgeous, romantic, ballad centered on the pizzicato cello and violin of Redhage and Brock.

The album's tour de force is "Mingus Moon," a nine minute opus that slips and slides through Brock's slightly spooky violin; a sharp, Balkan-style passage driven by Hudson's piano and Urbach's percussion; and finally some deftly played late-night bluesy piano. The tune brings Galactic Diamonds to a fittingly varied close—a summary of the changing moods and motifs that make this album so consistently intriguing and enjoyable.