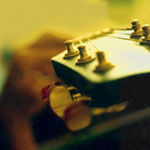 Quick and to the Point: Unique and fascinating guitar led work in improvisational music that eludes genre categorization.

"Sztez," as I can manage Gabriel Szternsztejn's last name, is a bearer of the future of guitar playing roaming alongside the border regions of several musical geographies. Improvisational-minded music, as "Sztez" produces here, immediately remits to jazz. There are, nevertheless, suggestive vistas from elsewhere such as Classical and European derived folk forms—as well as a mixture of percussive effects and colors—in this self-titled Argentinean release.

All throughout, one can hear a cosmopolitan guitarist grounded in his stringed instrument through an architectural understanding of its history. His deeply expressive compositions, arrangements and performances, do not recur to unintelligent melodic resources. The clear improvisations do not generate affected aimless abstractions in their resolutely concise approach to a felt emotive vastness communicated through a minimalist sense of purpose guiding each tune's instrumental and sonic character. When one has a testicular technique—without recurring priapisms—matched by a tone exuding curiosity, singular harmonic and melodic formations can—and do ensue—under Szternsztejn's leadership. Except for the help received with the piano arrangements on "El viento" and "Remar," the recording was entirely composed and arranged by "Sztez."

Gabriel Szternsztejn will not betray anyone open to the best music available throughout the world, as this artist is much more intent into producing seemingly simple challenges rather than limiting himself to musical and ethnic agendas disloyal to the sincere quest for cultured contemporary music. Indeed, "Sztez" could very well be counted among many leading exponents of cultured broad-based contemporary music with improvisational inclinations.