By KEN DRYDEN
September 9, 2007
Sign in to view read count 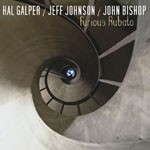 Hal Galper's aptly named Furious Rubato, finds the pianist opening the listener's ears by stretching the tempo of the tunes and frequently seeming to be playing independently of his rhythm section without ever losing sight of the harmony within each song, approaching free jazz but never abandoning post-bop. He's accompanied by bassist Jeff Johnson (who has worked with Galper regularly in the past) and drummer John Bishop, both of whom excel in meeting the pianist's demands.

The fireworks start with his avalanche-like introduction to Miles Davis' "Milestones (the song first recorded for Savoy, not the later one for Columbia that's also known as "Miles ), the piece cooling slightly as Galper steps back to feature Johnson then rekindling the fire in his exchanges with Bishop. He recasts John Coltrane's "Naima by incorporating unexpected space between its chords, while his turbulent reworking of Davis' "Miles Ahead also reveals new possibilities. Galper's originals are no less demanding, highlighted by his off-center ballad "Valse Cool and intense "Chromatic Fantasy. Johnson contributes "Zen, which initially sounds like a meditation but builds to a dramatic climax. Hardly a typical jazz piano trio session, this fascinating music is well worth exploring.