Kevin Coelho: Funkengruven: The Joy of Driving a B3

By HRAYR ATTARIAN
September 7, 2012
Sign in to view read count 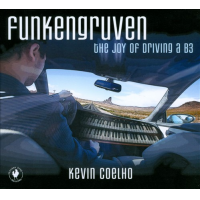 Kevin Coelho's debut, Funkengruven: The Joy of Driving a B3, is a tight trio affair that showcases the young organist's versatility as he successfully cooks his way through originals, R&B songs and fusion and bop standards.

Coelho brings a religious celebratory feel to teacher Randy Master's "Take A Stand," as his Hammond B3 lets forth spiritual and sophisticated harmonies. This contrasts well with the unabashedly sensual groove of Dr. Lonnie Smith's "Play it Back." Harking back to Blaxploitation film soundtracks, Coelho's solo is both viscerally moving and intellectually satisfying. Reggie Jackson's rhythmically complex drum work drives the tune with hard rock intensity.

Coelho is able to deftly tackle a piece as intelligently elaborate as Miles Davis and Charlie Parker's "Donna Lee." Together with DiCenzo and Jackson, he endows the bebop workhorse with a funky aura while respecting its inherent intricacies.

Coelho also demonstrates his common touch with such pop-oriented materials as the tenderly mellifluous "What's New" and Otis Redding's soul classic, "Dock of the Bay." In both cases, he sticks close to the melodies, still managing to add a fresh gloss with his laidback vamps and clever adlib turns of phrase.

This intriguing record introduces a talented new voice who, albeit somewhat under the influence of mentor Tony Monaco (who also produced the disc) and other idols, manages to display his fledgling individualism—and, not that this is either here or there, all at the tender age of just sixteen.