Peloton: Funeral, Circus and other music 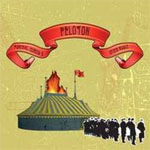 This might be something of a confusing album to track down, going under the same name as a Norwegian jazz quintet, issued on a little-known Finnish label, and featuring a style that is hard to readily classify. However, the big top featured on the cover sets the tone for this broad collection of pieces, as does the album title itself. With an eight-person crew, the music falls into the broad space between classical and free-form, produced by two violins, viola and cello, fronted by trumpet or tuba, sax or guitar, drums and double-bass.

John Cage is not such a distant echo, but with its stronger rhythmic core this music is less demanding without losing its intellectual appeal. The band claims influence from Jim Jarmusch and John Lurie, and there is certainly a feeling of accompanying drama. The groove is sometimes reminiscent of Joe Morris' meandering explorations with Hamid Drake and William Parker, before it typically resorts to a full-frontal saxophone assault and then links up with the string section to finish with a klezmer-tinged, gypsy chorus.

This is "Häthätää," the central piece of the disc whose name also implies a restless hecticness also captured on other tracks. "Heroes" features a vocal that reeks of a deadpan William Burroughs voiceover, while "Väeltava aalto" ("Wandering Wave") captures a Brechtian spirit of wayward adventure, despite its lack of vocals. The penultimate "Un fou," with its French text and chorus, and spiraling arpeggios, explicitly cherishes the spirit of circus surreality which pervades the disc. In comparison with genuine Gallic performers it may appear restrained, but the transitions between emotions are sublime, with the frontline instruments often picking up the themes of the strings and taking them to another level.

Finland is mainly respected as a country where, alongside a very professional approach to music making, introspection and solo contemplation are much explored. As the country is ever more integrated into the European fold it seems to be losing this heritage, with Peloton perhaps reflecting a trend towards greater expressiveness, even frivolity. The back of the sleeve of this, its first disc, presents the band members divided into two groups, described in French as Les Cordes Magnifiques, the magnificent strings, and Les Géants de l'Esprit, the other four members who comprise the leading spirits. Maybe it is no coincidence that three of the key band members are currently performing nightly in a multi-cultural show in their hometown of Helsinki. With a group of modern dancers, they strive to throw theatrical light (or, rather, sound) on the eternal human tension between the mundane and mankind's efforts to accommodate its dreams—efforts which so often involve it in music.