By DAN MCCLENAGHAN
October 9, 2019
Sign in to view read count 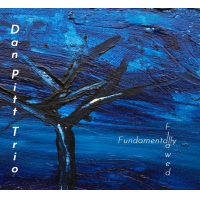 Toronto-based guitarist Dan Pitt has tagged his debut album Fundamentally Flawed. It is a trio recording full of gorgeous, glowing chords and inspired accompaniment, beginning with the tune "Balmoral," a study in patience and off-kilter beauty. And throw in the sound of a trio equilibrium and telepathic interplay. If that opener marinates in the brooding side of sound, the title tune that comes next puts some pep into the sound, while maintaining a cerebral mood.

The trio sounds something like a surf rock trio working at a level of higher musicality than you might find in that genre, with a lot less of a focus on the groove, and a lot more of a feel for spontaneity and improvisation. "Mark I" opens in an atmospheric mode—thoughtful and introspective, while "Overdewitt" sounds like a heavy metal dirge, Pitt's guitar as resonant as can be—somehow visions of the slow rotation of a giant, gleaming-in-the-starlight space station comes to mind, the tick of the drums representing the mechanical inner workings of the beast, before it moves into a ragged shine of crunchy chords before shifting into a furtive mode. Pitt's guitar sounds as if it's plugged into some supercharged form of electricity. The atmosphere is ominous. "Mark II" slinks into consciousness, with Pitt employing sharp, clean lines in front of Alex Fournier's prowling bass and come-and-go, hammer-on-a-nail drums from Nick Fraser.

The word "atmospheric" fits this cohesive set of Pitt originals. But it is an "atmospheric" with guts. Composed sections slip into intervals of fluid improvisation, with an equilibrium of inspired instrumental input pervading, on a promising debut that has no fundamental flaws.