The PsychoAcoustic Orchestra: Fun with Notes 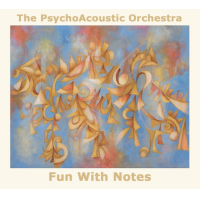 More than two decades ago, pianist / composer / arranger Patrick Kelly's Cincinnati-based PsychoAcoustic Orchestra recorded two neoteric albums, then quietly disappeared into the fog of time. As it turns out, Kelly explored other options for a while before re-forming the orchestra in 2006. The present incarnation, which has been performing ever since on a more or less regular basis, is no less assured and adventurous than its predecessor, showing no unease as it handily traverses Kelly's intricate compositions and arrangements.

Truth be told, the passage of time has brought with it such renovations in the big-band repertoire that Kelly's themes now seem as much mainstream as they once were considered avant-garde. While Kelly's influences (Charles Mingus, Sun Ra, John Coltrane, Ornette Coleman among them) remain unaltered, what has changed is the music itself, as jazz in general and big bands in particular have broadened their precepts and become more accepting of new purposes and perspectives as set forth by the likes of Maria Schneider, Carla Bley, Charlie Haden, Darcy James Argue, Satoko Fujii and others.

That's not to imply that Kelly's compositions and arrangements are anything less than cutting-edge. Far from it. But given today's panoramic big-band lexicon, they are far more, dare we say, conventional than might have been the case in years gone by. One reason for this is that in spite of his modernist point of view, Kelly never casts aside time-honored harmonies and rhythms in favor of asymmetry and discord, thus lending even the most progressive themes an aura of lucidity and candor. While having "Fun with Notes," Kelly makes sure the listener is having fun as well, framing tantalizing tone poems that enliven the heart as well as the mind.

Highlights abound, from the opening "Notes" to the playful finale, "Ornette," the only number not recorded in 2015 (it was appended from a septet session recorded thirteen years earlier and featuring alto saxophonist Rick VanMatre sitting in for the song's namesake). VanMatre, a charter member of the PAO, is one of a number of sharp-shooting improvisers on "Notes" including Kelly; trumpeters Kim Pensyl, Jeff Folkens and Hank Mautner; tenors Steve Hoskins and Garin Webb, trombonist Marc Fields, bassist Mike Sharfe and drummer Marc Wolfley. Good as they are, it is Kelly's admirable charts that carry the day; suffice to say that each one is resplendent in its own way, signaling a long-overdue and explicitly triumphant return to action by the irrepressible PsychoAcoustic Orchestra.