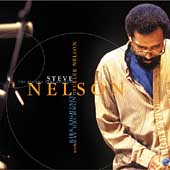 You have to have roots. Talk to almost any modern player and they'll stress that in order to get where they are today, they had to walk a road paved in tradition. Few understand or articulate that as well as vibraphonist Steve Nelson. Given that he came to wider attention through his forward-thinking work with Dave Holland over the past nine years, one might be surprised to see that, when faced with the opportunity to release an album under his own moniker, he returns with deep devotion to his more mainstream influences—Hamp, Bags and Hutcherson—but return there he does, and with great aplomb, on Fuller Nelson , the follow-up to his '89 recording Full Nelson.

Mind you, this recording was actually made in '98, when Nelson's light was just beginning to shine as Holland's nascent quintet was turning heads with Points of View . And thanks are clearly due to bassist Ray Drummond, who instigated Nelson to reconvene the trio, rounded out by pianist Kirk Lightsey, best known for his work with Dexter Gordon in the late '70s and '80s. Together the trio plays with a delicacy and grace that makes this a lightly swinging, easy-going session of ballads, blues and standards that may not rattle any musical cages, but demonstrates that when played with vitality and a complete lack of assumption, mainstream jazz still has plenty to say.

The sound is warm, with no sharp edges. The Cahn/Van Heusen standard "The Second Time Around" kicks things off and sets the tone for the whole album, intimate without losing its essential swing. Whether tackling Cole Porter's "Easy to Love" or pieces by Nelson and Lightsey, there is a consistency that makes the standards and originals blend seamlessly; Nelson and Lightsey write so much in the tradition that it sometimes becomes difficult to differentiate their material from the established tunes.

That is not meant to imply that the set lacks diversity. "For Wes" is a tender ballad, subtly poignant. The drama of "Original #2" is expressed in a sublime ninety seconds. "Laila in Blues" harkens back to the Modern Jazz Quartet, with Nelson showing his debt to Bags while still managing to make it sound completely his own. "I Don't Stand a Ghost of a Chance with You," another evocative ballad, finds Nelson elegantly delivering the melody, with Lightsey choosing just the right notes in support.

Fans of Nelson's work with Holland will likely be surprised by the unexpected traditionalism of Fuller Nelson , but the deeper truth is that artists don't develop in a vacuum. And with an album of refined beauty and unabashed homage, Nelson and his trio have created a recording that soothes the senses and relaxes the soul.

The Second Time Around; Kirk's New Delight; I Don't Stand a Ghost of a Chance with You; Song for Justine; Easy to Love; Heaven Dance; Minor Blues; For Wes; Original #2; Laila Blues