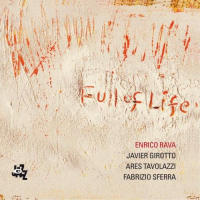 In a recent AAJ article, Marc Meyers makes a strong case for a new mainstream in jazz, championed by artists like trumpeters David Weiss and Dave Douglas, as well as the improvisationally and compositionally rich SF Jazz Collective. But it's worthwhile to note that there are still artists out there mining the legacy of the more conventional mainstream for new riches.

Italian trumpeter Enrico Rava, who enjoys a reputation as a fearless improviser in a multitude of contexts, chooses to examine that legacy on this '02 session for the Italian Cam Jazz label. Full of Life was recently issued in the US as part of Cam's distribution deal with Sunnyside Records. While only three standards appear in the eleven-song programme, the rest—composed by Rava and saxophonist Javier Girotto—feel equally locked in time, but in a way that doesn't diminish their freshness.

One reason is the lineup: a quartet fleshed out by bassist Ares Tavolazzi and drummer Fabrizio Sferra. Lacking any kind of chordal accompaniment, this instrumentation is generally more closely associated with the free jazz explorations of Ornette Coleman's classic quartet or, more recently, John Zorn's Masada and Dave Douglas' Magic Triangle quartet. And, to be sure, while Tavolazzi and Sferra keep things on form throughout, they stretch time in a modernistic fashion, instead of relying on the swing-defined rhythmic tendency of most mainstream ensembles—and that's one definition, if there is such a thing, of a European jazz approach.

Another reason is that Girotto's saxophones of choice are the soprano and baritone variety. While the soprano entwines with Rava's trumpet and flugelhorn seamlessly and organically, the lower range of the baritone creates an inherently larger sound that makes the front line sometimes sound bigger than it is. And it's no coincidence that Rava chose to work with a baritone player, since his music makes clear references to work by Gerry Mulligan and his collaborations with Chet Baker. In fact, the generally soft ambience of the entire set is in clear homage to the West Coast Cool of which Mulligan and Baker were such instrumental parts.

There's an uncanny sense of the familiar in tunes like Girotto's swinging "Miss MG" (of which two versions are presented here), the soothing bossa of Rava's "Recuerdos," and the ambling "Happiness is to Win a Big Prize in Cash" that makes them feel of a kind to the standards: "The Surrey With the Fringe on Top," where Rava breaks up the familiar theme with well-placed rests, the balladic elegance of "Moonlight in Vermont," and a dark-hued reading of "Nature Boy."

But as much as form plays a major role, the interplay between Rava and Girotto suggests more open-mindedness at work. "Nature Boy," in fact, often hints at more than it actually states, from both the front line and the rhythm section. It's this kind of liberal approach that makes Full of Life avoid the conventional, even as it remains clearly respectful of its roots.