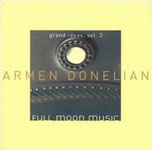 Precious few listeners are aware of Armen Donelian. A tremendously talented pianist who has never had a major label signing nor has attached his name to a legend or star of some sort, Donelian has quietly created a body of work that at the very least is consistent, at best exhilarating. His latest release covers the same amount of ground.

Full Moon Music is the final installment in Donelian's Grand Ideas series. Volume 1 - Wave focused on standards and popular song, Volume 2 - Mystic Heights focused on original compositions, and this third installment consists of fourteen spontaneous improvisations. While the sound of Full Moon Music may not instantly take hold of your senses like recitals from the likes of Keith Jarrett or Brad Mehldau, Donelian provides a constant stream of ideas and beauty that is hard to deny.

In fact, during many of his improvisations, such as the opening "Preamble, his ideas are so complete that they sound like a pre-composed melody that you have known from somewhere before, but simply can not place. And while the songs are good, they do not move the listener into a place of discovery as often as one would hope.

Although the tone of the album never leaps beyond its lush midrange soundstage, Donelian does present a visual sense where every song has considerable variance and movement. Titles inform, or are informed by, the music associated with them, whether they are a "Barren Landscape, "Pilgrimage, or "Beer Drinker's Anthem, with its warbling, slightly out of tune sing-song quality.

Throughout the program, Donelian keeps his considerable technique in check, unleashing it only when it serves the song, as on "Young Asses at Play, where his hands dance around each other, creating a whirlwind of punchy notes. He begins to incorporate extended techniques here as well, such as scraping the strings of the piano. Following this playground of sound, he comes back around to the opening whirlwind this time with a sense of weariness in the higher register and a much slower tempo, as if almost exhausted. And as the album continues into "Blues Montage, he treats the listener to variations that range from deep grooves to manic right-hand movement over a repeating left-handed bass line, while working within the stated medium. In these moments, the music leaps forward and shows what a considerable talent Donelian really is.

Nonetheless, even with these flights of fancy, the sense of daring that one would expect to permeate an album of improvisations is not present at every turn. In fact, without prior knowledge of the album's conception, one would be hard pressed not to argue that many of these songs are not through-composed miniatures of nuance and beauty. Ultimately, this completeness is actually Donelian's worst enemy and best asset.

Visit Armen Donelian on the web.

Preamble; A Call To The Spirits; The Witch