By MARTIN LONGLEY
September 13, 2008
Sign in to view read count 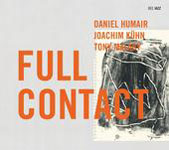 This transatlantic collaboration features the long-established partnership of Swiss sticksman Daniel Humair and German pianist Joachim K ühn, but the presence of saxophonist Tony Malaby further establishes the latter's fast-ascending status outside of the US. The reedman isn't blowing as belligerently as usual, tempted into exposing his softer side, his warm tone denuded of its lime-scale textures.

The material is clearly composed, but in such a manner that much of the trio's interaction sounds completely improvised (there are pieces penned by each member). The language of the spontaneous is becoming so advanced (or even ingrained) that it's becoming increasingly difficult to discern the moment when one form flows into the other. The disc's opening skirmish reveals all three players in a swiftly overlapping state and then Humair takes a drum solo, followed by more trio flooding and then, in the name of symmetry, a piano solo. Humair's skins are tonally rich down at the low end, helping fill in any absence felt (imagined or not) by the absence of a bassist.

All three are constantly restless and enquiring, continually seeking satisfaction, with themes and solos smudging into each other in a blur of hyperactivity. On the title track, K ühn takes off on a crazed scamper, with Malaby entering at what turns out to be the piece's peak, acting as a closing force. Then "Ghisl ène" is a staccato head-banger, with complete equality for all three players, as they intuitively negotiate outbursts of either dominance or passivity, switching roles in an instant, energized, but also moving through a varied range of dynamic stages.