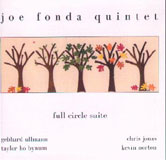 Like the majority of his peers Joe Fonda has spent a large segment of his career on the fringes of public recognition, plying his skills resolutely and biding his time with a patience that would sour far sooner in the case of many musicians. Rewarding posts with the likes of Anthony Braxton and Mark Whitecage sustained his resolve and as this disc illustrates he's still going strong with no signs of flagging. Full Circle Suite is demanding on a host of levels- the compositions/improvisations are lengthy and the players possess a concurrent intelligence and acumen that assures that intensely challenging roads will be trodden. But like any musical mollusk, whose carapace is tough to crack, the sweet meat contained within these dense offerings will leave you craving more. And any warning for the faint of heart will no doubt go unheeded by listeners who know these players well anyway.

In attendance for this safari of swirling sounds are a colorful assortment of improvisers from startlingly diverse backgrounds. Jonas is rapidly becoming one of the premiere stylists on his instrument as the recent The Sun Spits Cherries so succinctly demonstrated. Boston-based Ho Bynum is generating similar stature on his array of brass. German-born Ullmann, a master of numerous reeds, opts to focus his attentions solely on bass clarinet. For his part, Norton is no stranger to the cozy confines of the Spirit Room Fonda's bass lines are a blur of string punishing strength, often so rapidly conceived as to be numbing in their potency. All of these combustible agents detonate on 'Next Step' and keep a bonfire burning through the closing 'Deconstructed Borrowed Time.' The former piece opens at a galloping clip thanks to Norton and Fonda who hammer out a breakneck fusillade of rhythms. The horns dart and weave at blinding speeds around these obstacles before the momentum dissolves in an interlude of small percussion. Eventually the opening theme arrives again taking the piece out in a vortex of centripetal lines.

The disc's title piece, which takes its inspiration from the Native American medicine wheel and the directional points of the compass, clocks in at nearly thirty minutes. The interlocking sections of the piece feature all kinds of instrumental interactions replete with highly individualized solos from most of the players. Overall the track is a little tough to take and requires a concentrated ear to discern the ways in which the pieces finally fit together into a cohesive whole. 'It's Good To Know You' is largely a feature for Ullman who crafts a cartoon-like atmosphere of twisting, burnished lines in concert with a muted Ho Bynum and an angular Jonas. A quiet beginning on 'To Bob's House' swiftly gains volume sounding like a march of a motley band of minstrels through some primordial forest. Fonda's wordless moaning vocals couple with his resonating bass strings and Norton's tinkling bells adding an umbrella of mystery to the strange journey. Fonda may not have the mainstream jazz press in his pocket, but with projects as consistently fascinating as this one in his corner who says he needs them?